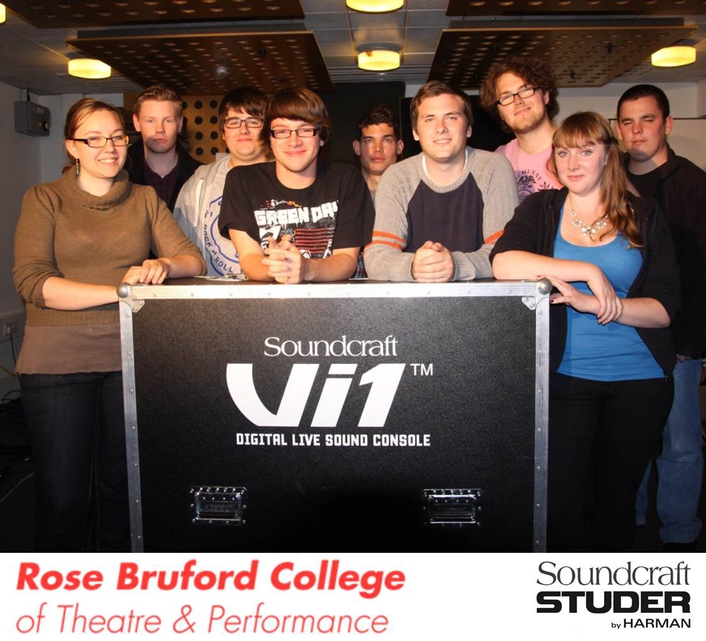 Soundcraft’s Director of Marketing & Communications, Keith Watson, agreed that the Vi1 had been the logical step forward
Students attending Rose Bruford College’s Performance Sound BA (Hons) course will now be able to hone their mixing and recording skills in live theatre, concert and broadcast more easily, thanks to the acquisition of a Soundcraft Vi1 digital console.

The course’s Programme Director Ben Davies, himself an experienced musician, studio and live sound engineer, said his search for an intuitive digital platform to accelerate cross-discipline learning had taken on a new momentum when one of the students contacted Soundcraft directly.“We were invited to Potters Bar to look at the various Si and Vi digital options—and it was clear the Vi1, with its compact footprint, was the most appropriate console for our needs,” said Davies.

“I believe we should be supporting British manufacturers. Soundcraft has always had a big presence in the colleges I have worked at and I knew students would be seduced by the Vi1. The interface is easy to use and they can operate it intuitively, as an instrument.”

Soundcraft’s Director of Marketing & Communications, Keith Watson, agreed that the Vi1 had been the logical step forward. “When we visited [Rose Bruford College] we were immediately impressed with the students’ enthusiasm and creative energy and the vision of the staff,” he said. “We provide Soundcraft and Studer consoles to theatres and performing arts centres all over the world so it's great to see such advanced technology in the capable hands of young and talented artists heading for careers in theatreland. We will follow their progress with great interest."

The Performance Sound BA (Hons) course was set up within the drama school four years ago and aside from working within their School of Performance and School of Design, Management and Technical Arts, Rose Bruford students also stage full productions at the Unicorn Theatre during their London season. In addition they take up placements within the industry. “All my graduates from last year are employed and some are already depping at FOH,” says Davies proudly.

Stated the former, “With this console I am now in a better position to teach my students what I do best as a living,” while Albo, an ambassador of Soundcraft’s Vi platform (who used the Vi6 on tour with Amy Winehouse), added, “It’s great to be able to come to RBC and work with students on a console that I know very well. Ultimately, they will benefit from this.”

From Soundcraft’s perspective this application provides the opportunity to show the desk’s capability in both the concert and theatre environments. “What was particularly attractive to the students,” believes Davies, “was the ergonomics and interface — and the complete integration of hardware and software.

“The other nice thing is the way the menus run with that big screen — it is like using Logic and they understand Logic really well.” 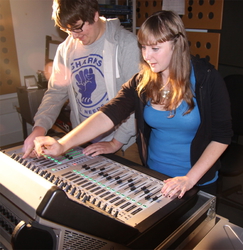 “The other nice thing is the way the menus run with that big screen — it is like using Logic and they understand Logic really well.”

He says the arrival of a dedicated live mixing desk is long overdue, and the new acquisition is paying handsome dividends. “The students have already pushed it to its limits in terms of its assignments. It’s a good cross platform FOH mixing desk in the auditorium and we use it for delays and to program different scene changes.

“We record our live gigs so we have a MADI card connected to a remote stage box. All mic and line signals are sent multitrack using Logic through the MADI.”

The last word comes from Final Year student Ollie Brennan, who says, “What is great about having this console is that we are able to learn to work with the very latest technology in front-of-house production sound. This gives us an additional head start in finding employment once we graduate.”