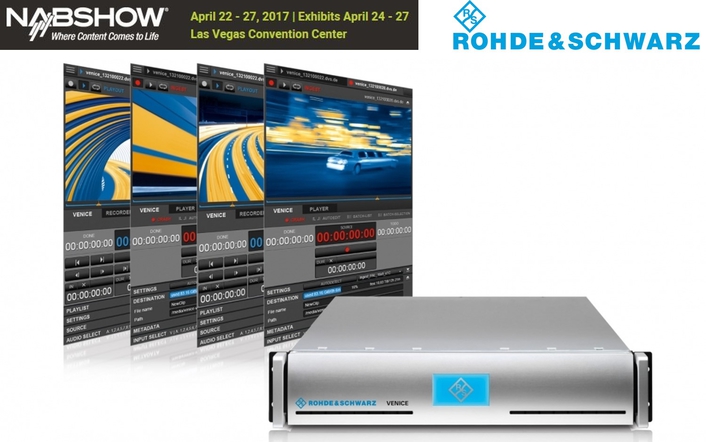 The ingest and playout platform from Rohde & Schwarz provides the most flexible and advanced workflow options. R&S VENICE is the right system for broadcasters and post-production houses that want to offer their viewers the highest possible quality while making smart investments for the future. The system will be available for viewing at NAB 2017 in Las Vegas from April 22 to 27.

With its open architecture, the ingest and playout system masters the most demanding broadcasts and productions. R&S VENICE provides a comfortable working environment and comprehensively covers all major formats and codecs. The system is easy to operate and, in an industry where time equals money, its transfer-while and edit-while ingest workflows ensure fast postprocessing. This convenient solution seamlessly ingests and plays out resolutions ranging from SD to 4K. And the transform functionality allows transforming into all supported formats. As a result, broadcasters are able to offer their television viewers the best programming at the best possible quality.

Intuitive, rich in features and ready for the future "R&S VENICE is a real workhorse," reports Michael Hackl, Product Manager, File Based Media Solutions at Rohde & Schwarz. "We are proud that so many major customers use R&S VENICE, including Sky Deutschland, Studio Berlin-Adlershof, the state-run Czech TV and the Berlin International Film Festival."

The solution offers workflows for SD to 4K and can be used for ingest through to playout thanks to its comprehensive range of functions and software applications. R&S VENICE handles all current codecs, including of course Apple ProRes, Avid DNxHR and Sony XAVC. And the ground-breaking software architecture makes it possible to add new codecs at any time.

Editors such as Adobe Premiere®, Final Cut Pro® and Avid MediaComposer® can be used during ingest to directly access and immediately start processing the data acquired by R&S VENICE. The system also simultaneously generates proxy files and closed-caption files from the data in the SDI stream.

R&S VENICE permits convenient playout of mixed formats and codecs without prior transcoding. The signaling and processing architecture is ready today for future HDR workflows, giving R&S VENICE an additional layer of investment protection. "Our customers especially appreciate the versatility of R&S VENICE," says Stefan Weidner, Sales Director Media at Rohde & Schwarz. "Its ability to process both current and future codecs and file formats makes the Rohde & Schwarz ingest and playout solution a secure investment for the future. That the R&S VENICE Control application makes the system highly intuitive to use for multicamera productions is considered an additional bonus."

With R&S VENICE Control – designed based on countless hours of user experience – up to 16 channels, each with a different resolution, can be simultaneously controlled during production. The channels are automatically assigned via multicast. Configuration via static IP address is also possible. The defined channels can easily be added for ingest via drag & drop. User simply create groups that they can modify as needed during production. All settings, including channels and presets, can be saved in an almost unlimited number of scenarios, enabling fast access to recurring recordings.

R&S VENICE Control can be installed on any number of systems and offers redundant control of all ingest requirements. If a system drops out, all ingest control processes can be immediately transferred to another system.

R&S VENICE at a glance:

•             Generation of proxies and closed caption files during ingest