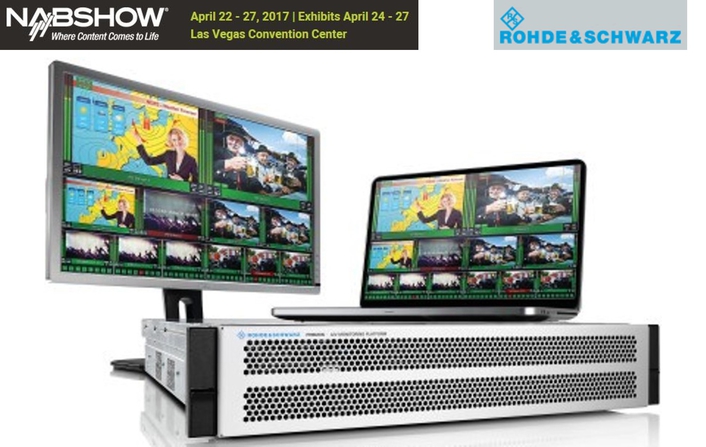 Rohde & Schwarz will introduce R&S PRISMON, its new monitoring and multiviewing solution for audio/video services, to the public for the first time at NAB2017. The solution is fully software-based and takes an innovative multistandard, multi-protocol approach. It supports traditional SDI signals and all relevant IP-based protocols, including MPEG-DASH, AIMS and ASPEN. Future protocols and media formats can be added via software upgrades, making R&S PRISMON a cost-efficient solution for all broadcast and streaming media service providers. R&S PRISMON is available as a standard IT platform and for the first time also as a cloud-based solution.

Broadcast and streaming media providers are faced with an increasing number of fast-evolving transport standards and media formats. A rapid response to changing requirements is needed in order to ensure optimal encoding and transport of media content, both of which are key to providing an exceptional, high-quality media experience for premium pay TV customers, for example.

With the new R&S PRISMON, Rohde & Schwarz offers a flexible solution for automatic monitoring of transported broadcast and streaming media content. R&S PRISMON allows service providers to meet their contractual requirements with regard to service quality and availability in order to ensure customer satisfaction.

Hannes Strobel, Vice President of Monitoring & Headend at Rohde & Schwarz, states: "R&S PRISMON takes the innovative monitoring functions from the BMM-810 to the next level, and it adds new functionality for use in playout and contribution environments. For the first time, a single instrument platform can now be used to monitor both contribution and distribution – including the dynamic field of streaming media services. With this solution, we envisage a major potential for cost savings and productivity improvements for our customers."

R&S PRISMON is fully software-based, making it a flexible and adaptable solution. It supports, among other features, the SDI, SMPTE 2022-1/2, SMPTE 2022-6, AIMS, ASPEN, HLS, DASH transport standards as well as media formats such as MPEG-2/4, HEVC and TICO. Future new standards and media formats can be added via software upgrades efficiently and flexibly. R&S PRISMON automatically detects dropouts and content errors in realtime, using sophisticated monitoring functions such as "Video freeze with whitelisting" and "Video content compare".

A large number of channels – including those in UHD quality – can be monitored in parallel with R&S PRISMON and visualized in a straightforward manner on a multiviewer video wall. Using a mobile app, a cloud-based service from Rohde & Schwarz subsidiary GMIT transmits the collected monitoring data via a secure connection and displays it on mobile user equipment, allowing technicians for the first time to quickly identify and assess the sources and effects of errors without requiring an on-site visit.

R&S PRISMON is easy to set up and operate via its intuitive, web-based user interface. It is up and running within a very short time and can be administered via SNMP or remote API. Users can conveniently adjust the layout of the multiviewer video wall to their specific needs using graphical editors. R&S PRISMON allows fast and easy operation and administration under widely varied operating conditions.

The R&S PRISMON monitoring and multiviewing solution is now available from Rohde & Schwarz on hardware at various performance levels and as a cloud-based installation. Come and visit us at NAB 2017, booth SL 1205.