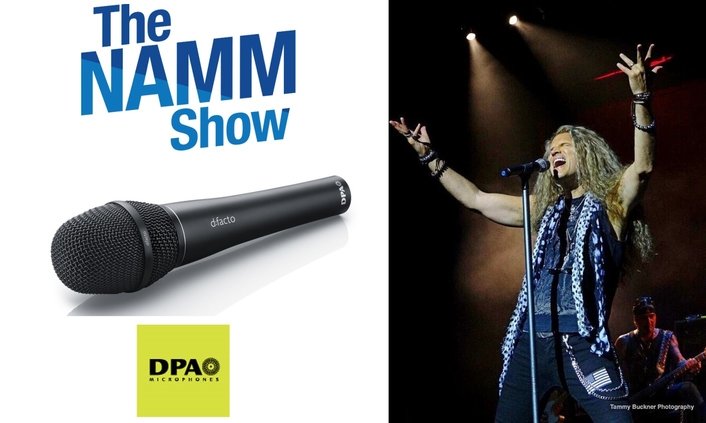 When the professional audio and MI worlds come together for the 2019 NAMM Show, DPA Microphones (Booth 18507) will be center stage. The company will have a stellar line-up of in-booth performances, all of which will highlight DPA’s impressive range of world-class modular microphones and accessories including the d:vote™ CORE 4099 Instrument Microphone and d:facto™ 4018 Vocal Microphone. The DPA performance line up is comprised of a powerhouse group of artists, including Great White lead singer Mitch Malloy, funk/soul singer Dawn Joseph, solo cello/vocalist Sarah Clanton and classical guitarist David Steinhardt with professional violinist and composer, Jason Yang.

“We are very excited to have such an eclectic group of in-booth performances at NAMM this year,” says Evan MacKenzie, DPA marketing & communications manager, DPA Inc. “Swing by the booth to see and hear our mics in action, via isolated listening stations, with a wide range of musical styles.”

Recently joining Great White, Malloy has been a successful vocalist, producer and engineer for over 20 years. Malloy charted his first solo single, “Anything At All” in 1992. His subsequent hits “Nobody Wins in This War” and “Our Love Will Never Die” also made Billboard’s Top 100. Most recently he’s been cranking out penned hits and producing clients for his Malloy Master Tracks studio. These clients include Taylor Swift, Boys Like Girls, Kenny Loggins, Craig Morgan, Johnny Gates and many more.

Dawn Joseph has been a backing vocalist for soul, pop and R&B greats such as Michael McDonald, Cee Lo Green, Phil Collins, Rod Stewart, Rick Astley and Michael Bublé. In 2009, Joseph replaced Marcella Detroit in Shakespeare’s Sister, shortly before joining Spandau Ballet for their comeback Reformation World Tour. In 2012, she successfully fronted The Brand New Heavies, then in 2016 along with founding member Jan Kincaid, formed new band MF Robots. Joseph is no stranger to the stage. Being a background singer to the biggest stars in the world for over 10 years, it’s time for her to step out front. Joseph and her band bring funk, disco and pure soul to every venue they play. Her band includes Eddi Jarl, Henrik Møller, Søren Heller, Mark Chemnitz and the Cuban percussionist, Eliel Lazo.

Sarah Clanton is a Nashville singer-songwriter who has brought the classical and pop worlds together with her use of a cello, rather than a guitar, to front one of Music City’s most unique bands. The up-and-coming superstar recently released a new solo album, Here We Are.

Jason Yang is a composer and professional violinist who has performed all over the world with Madonna as her violinist. In 2012, he completed the MDNA Tour, which consisted of 88 sold-out stadium and arena shows throughout Europe, North America, South America and the Middle East. Yang also performed alongside Madonna and Stevie Wonder in the memorial tribute to Prince at the 2016 Billboard Music Awards. Yang is currently scoring films, video games and creating music for live shows. Yang is a USC alumnus with over 200,000 subscribers and over 39 million views on his YouTube channel. He has performed on Glee, The Colbert Report and The Tonight Show with Jay Leno.