Robert Juliat Victor Followspots Come to the “Cabaret” at Studio 54 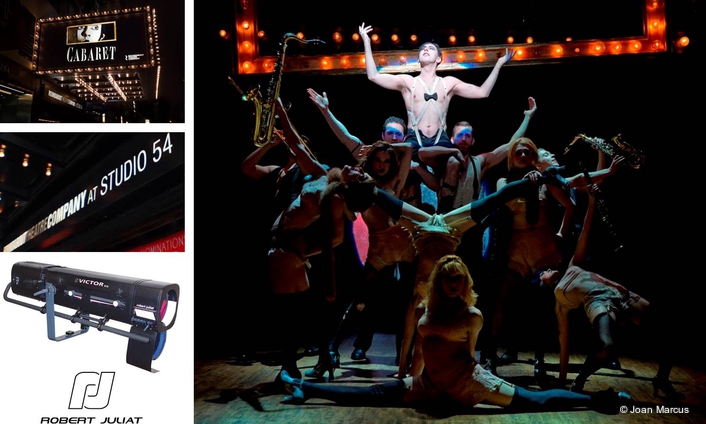 “I was very familiar with Juliat fixtures from working in Europe,” says Mike Baldassari, co-lighting designer for “Cabaret” with Peggy Eisenhauer.  “The Victor followspot was in the exact neighborhood of what we needed at 1800 watts.  We did a shoot out with some other followspots to test not only for brightness but also for noise level.  The shoot out was facilitated by electrician John Wooding; Ron Fogel of Fogel Associates and Fred Lindauer of Robert Juliat provided the Victors for us to test.”

Baldassari points out that Studio 54 was originally built as the Gallo Opera House in 1927 so its acoustics reflect its heritage.  “The way the dome is constructed projects all sounds like a microphone.  The two followspots were off to the sides on custom-built platforms, exposed and in the house.  So how much noise they made was a critical issue for us.  Sound is not always a consideration, but in this case it was paramount.”

During the shoot out the Victor followspots scored points for their quiet operation and for having the smoothest field of the fixtures tested.

The use of the DMX douser control provided with the Victor followspots allowed the intensity of the fixtures to be controlled from the lighting console which was a “huge feature for us,” Baldassari says.  “Because of the side spots being 45˚ off of center from each other, it was very difficult for the operators to judge their relative intensity against each other.  By using the DMX dousers, we could set the level to exactly what we wanted, which would be 100% repeatable, and the operators only had to worry about finessing their pickups and irises.”  After acquiring the Victors Baldassari and Eisenhauer added scrollers in front of the units which are also controlled from the lighting console.

The Victor followspots’ “set up is really perfect for what we need for ‘Cabaret,’” he declares.  “They’re a really great light.  We knew they would be spot on – no pun intended!”

Eric Yaple was the sales person at dealer PRG.  Steve Beers is the technical director at Roundabout Theatre Company.