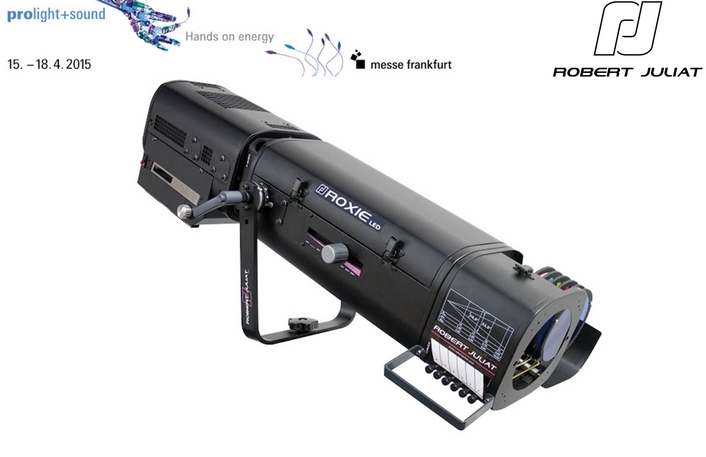 Robert Juliat’s new 300W LED ROXIE followspot receives its official launch at Prolight+Sound 2015
Robert Juliat will be out in full force in support of the 20th Prolight + Sound show in Frankfurt, where the company will exhibit alongside its German partners, Lightpower GmbH, in Hall 11 Stand D76.

At the opposite end of the scale, the rugged Merlin 2500W HMI touring spot - launched at PLASA 2014 - will be shown for the first time at Prolight + Sound. The first shipments of Merlin will soon be delivered to customers across the world through RJ’s international distributor network and feedback is already indicating the rapid success of this touring wizard!

Robert Juliat will extend its popular ZEP Fresnel range with the presentation of the new 360LF 300W LED Fresnel, a complement to its 150W little sister, the 340LF.

Most exciting of all, Robert Juliat will introduce a completely new LED solution for cyclorama lighting, details of which have been kept firmly under wraps…until now. The exclusive new model, known as DALIS, is an asymmetrical cyclorama light with an LED source.  DALIS has been designed specifically for theatre, TV and entertainment applications to deliver wall washes as well as cyclorama applications. “DALIS has been developed in response to demands from our clients who want Robert Juliat to provide an LED cyc light. This will be the first presentation of DALIS which promises to be an unprecedented addition to the RJ portfolio,” says Claus Spreyer. Scheduled demonstrations of DALIS will take place on the Robert Juliat stand throughout the day.

“This year’s landmark 20th Prolight + Sound show is destined to be very exciting for Robert Juliat,” says Claus Spreyer. “The response to Roxie and Merlin has been tremendous and we are looking forward to bringing our wealth of new products to Prolight + Sound for the first time. It gives us the opportunity to share our exciting new developments with our extended Robert Juliat family and the many international visitors to the show.”