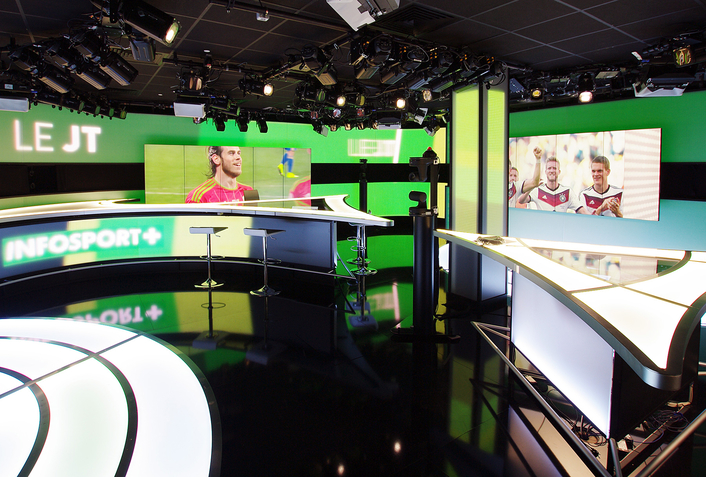 This is not the first time Robert Juliat Tibo LED profiles have been favoured by Canal+. The same model was installed in 2013 at the INFOSPORT+ studio, at that time with a white body colour to blend with the studio’s white feature ceiling. Successful comparative tests were conducted by the studio’s technical team to evaluate the homogeneity of the colour temperatures between the units already used in the former studio and the new profiles. The new fixtures were proved to deliver consistent performances, and this homogeneity, together with Tibo aesthetics and compact design, definitely convinced the technical team. As a result CANAL+ demonstrated its confidence again in Robert Juliat Tibo LED profiles by investing in a second shipment.

“We have the option to mix and match 3-year old LED profiles with newly delivered ones, with no deviation in terms of colour rendering, which has led to significant money saving,” Jean-Marc Delage stated. “In addition, the low energy consumption, the stability and reliability of the Tibo profiles have been really instrumental”.

Growing pressure to cut energy consumption has seen many TV studios turning to LED lighting. Tibo has come into its own, brilliantly delivering powerful output from a 75W LED source with no loss of projection quality. Its die-cast aluminium body work has given rise to a stylish and compact unit design, whereas its exclusive optical device allows two different zoom ranges - from 15° to 45° - in one single unit.

“We also chose Tibo because Robert Juliat gave us the opportunity to design bespoke profile yokes which would fit our limited hanging space,” adds deputy operations manager, Nicolas Michaud. “The profiles spots had to be installed very close to the ceiling so it was essential to save a few centimetres. Robert Juliat were able to accommodate this and perfect the final solution.”

Launched at the opening of the UEFA EURO 2016 finals in France, the new studio broadcasts live news 7/7 and up to 18 hours a day and will cover the Summer Olympic Games Rio 2016 at a steady pace in the coming weeks. Tibo will be supporting them all the way!