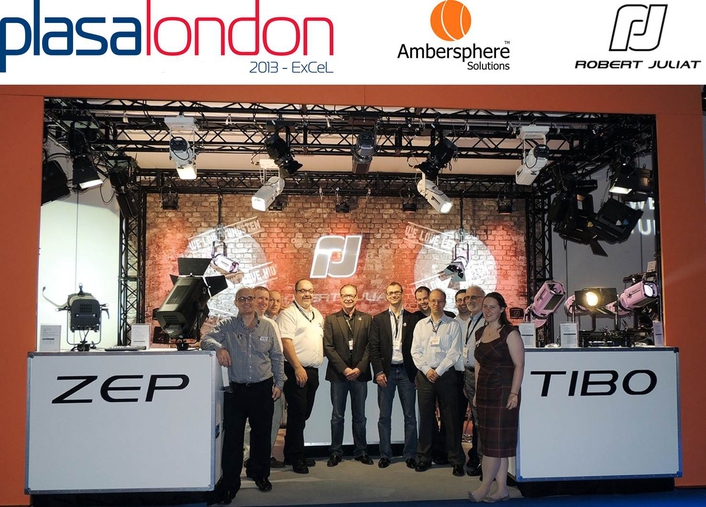 The Robert Juliat and Ambersphere Solutions teams proudly show off their ‘I Love Tungsten’ badges
As the newly-located PLASA show opened its doors last week at London’s ExCel Centre, Robert Juliat was happy to report superlative results. “The show provided an excellent forum to meet our many international partners from Robert Juliat’s Family of distributors,” says Robert Juliat Sales Director, Claus Spreyer. “We were very impressed with the range of visitors to our stand who came from almost every part of the globe including Eastern, Northern and Southern European countries, South Africa, Asia, South America, USA, Canada and the Middle East.”

Exhibiting for the first time with Ambersphere Solutions, its new UK exclusive distributor, Robert Juliat revealed a bright, new-look stand design, complete with a range of startling pink TIBO fixtures. “The pink TIBOs succeeded in drawing a lot of visitors to the stand and generated much excited chat on the social media networks,” laughs Spreyer. “It was a perfect, eye-catching illustration that Tibo is available in many custom colours.”

Robert Juliat chose PLASA to unveil a prototype of its new motorized yoke accessory which acted like a magnet in drawing people’s attention.

“We are really thrilled to see people’s reaction regarding this enhancement to the Fresnel range which will be available from January 2014,” says Spreyer, “and to note the attraction it had for visitors to the booth.” More information about Robert Juliat’s motorized yoke and associated functions will be communicated in a few weeks.

The range of Robert Juliat followspots proudly displayed by Ambersphere on their stand attracted a lot of attention from a whole new customer base. “This was very exciting to witness,” adds Spreyer. “In addition, our ‘I Love Tungsten’ campaign corner was very popular with the theatre fraternity, as were the cosmetic tweaks to our famous Robert Juliat barn doors.”

Pink Tibo Fresnel on the RJ stand at PLASA 2013

Robert Juliat was proud to support the Knight of Illumination Awards for the first time at PLASA 2013 and was delighted to be a part of the glittering ceremony which took place on the first evening of the show. “The Knight of Illumination Awards is important event in recognising the skills and creativity of lighting designers working on productions in the UK,” says Spreyer. “We would like to extend our congratulations to all winners and nominees of these ever-more prestigious Awards.

“In review of our first PLASA at ExCel, we conclude that we are very happy with the reaction to our newly energized outlook and the level of international opportunities generated there. ExCel has proven an ideal venue and we were impressed with the show’s professional appearance and organisation.”