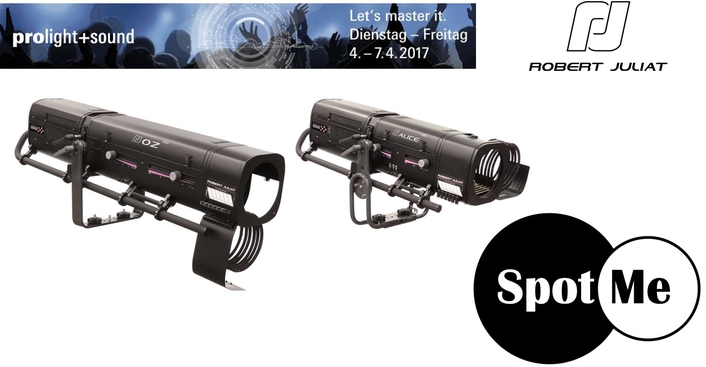 It’s been a number of years since Robert Juliat brought the full force of its followspots to a tradeshow, but Prolight + Sound 2017 will see these specialists showcase an army of their followspots, old and new, that have secured its place in the industry for many decades.

Established favourites Lancelot, Merlin, Cyrano, Victor and Roxie followspots will line up for inspection alongside the Dalis cyclorama fixture, as Robert Juliat followspot and Dalis expertise go on show.  But never a company to rest on its reputation, Robert Juliat has yet more surprises in store at Prolight+Sound!

Building upon the success of Roxie, its first LED followspot, Robert Juliat is taking the next step by previewing two new LED followspot models in Frankfurt. Meet Oz and Alice, the newest additions to the RJ followspot family. This dynamic pair feature a powerful 600W cool white LED source and the same high-quality functions and characteristics offered by the Robert Juliat classic Compact range.

Long- and short-throw models respectively, Oz and Alice are the first LED professional followspots to deliver a high output comparable with that of 1200W discharge followspots. Their compact dimensions and silent operation are coupled with the benefits of no heat, smooth electronic dimming - locally or remotely via DMX – and no lamp-change for less maintenance. A digital display, RJ45 connector and USB port are just some of the convenient features that come as standard. From small sources comes great power, and Oz and Alice are set to extend Robert Juliat’s LED capabilities into full size theatres and large venues.

Robert Juliat’s ZEP Fresnel 360LF series and ZEP profile 660SX series will also see an extension to its family as a brand new, variable white version will be presented to the public. The new source exhibits the same bright output as its siblings with a perfect evenness of beam and no hotspots. Ready to ship with immediate effect, the variable white models complement the warm white and cool white versions that have had such success since their launch.

The Dalis family will be on display with Dalis 862 Footlight and the award-winning Dalis 860 Cyclorama light presented alongside the newest additions to the family, Dalis 861 Washlight and Dalis 862S mini-Footlight.

Making its official appearance after its preview at Prolight + Sound 2016, Dalis 861 Washlight takes the same technology as the original Dalis Cyclight and reconfigures it into a rectangular format with 24 asymmetrical micro-reflectors and 8 LED emitters (6 colours and a warm and a cool white) arranged in four rows. Dalis 861 Washlight shares the same qualities of control, colour mixing, coverage and silent operation as both Dalis Cyclight and Footlight. Its extremely wide beam and perfectly even coverage makes it an ideal solution for side lighting and the perfect wash complement to the Dalis range.

Also new for Prolight + Sound, Robert Juliat will introduce Dalis 862S, a new variant of its award-winning Dalis 862 Footlight.  At 50cm in length, Dalis 862S is a shortened version of the original 1m model with all the qualities and functionality of the full size version. Dalis 862S has been created at the request of lighting designers who need precise footlight coverage on curved and non-standard shaped stages where its smaller form factor can be a big advantage in delineating stage edges to perfection.

Last but not least, in one of the most exciting revelations on the stand, Robert Juliat will unveil SpotMe, an advanced solution for their Compact and Grand ranges of followspots, which is designed to shine the light on performers in a smart, progressive way. To discover more, rendez-vous on the Robert Juliat stand in the Lightpower area in Hall 3.0 Stand C42.