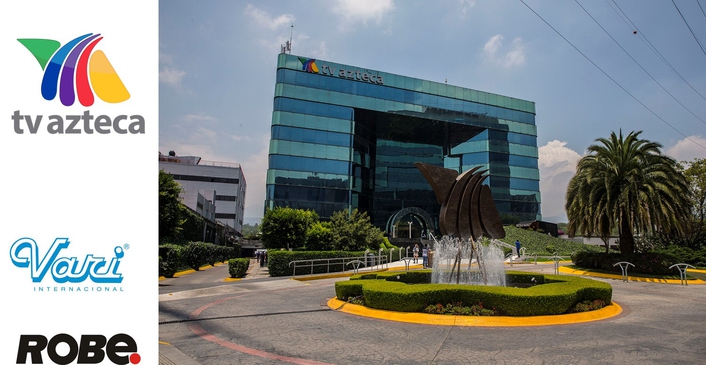 The fixtures reside at TV Azteca’s main broadcast complex in Ajusco in the south of Mexico City which has 7 studios and are used there and on another 11 studios at their other main site across the city in Tlalpan. TV Azteca broadcasts two networks – Azteca 7 and Azteca Trece - and 10 cable channels covering a wide mix of programmes, including news, soaps, quiz shows, music, reality, etc.

Lighting for all the programmes utilizing the studios is designed and co-ordinated by Manolo and Miguel – the department is working 7 days a week - and there are outside broadcasts on top of that.

TV Azteca owns a large quantity of lighting equipment. Manolo, who also LDs for outside shows and concerts had been using the Pointes increasingly  – they are one of the most popular moving lights in Mexico – and thought they would be perfect for the range and diversity of productions that they have to light at TV Azteca.

“It’s a great all-round fixture, extremely bright and with excellent performance,” he comments, adding that it’s extremely fast to programme, has great colours and is well priced for all the things it can do. “It ticked all our boxes,” he says with a big smile.

If they need to boost their current stock of 13 Pointes for selected shows, cross rentals are usually straightforward in the CDMX area because of the proliferation of rental companies who have invested over the last 18 months. 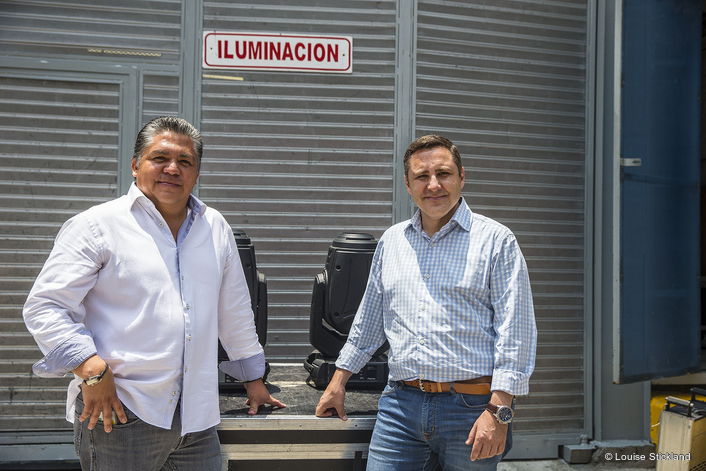 Miguel Osorno on the left with Manolo Toledo

“We are extremely happy, it’s been a solid investment,” says Miguel who thinks the prism is an excellent feature, as well as the frost which effectively transforms it into a wash fixture and he also loves the gobo selection and the crisp, clean quality of the lightsource.

The fixtures were delivered by Vari Internacional, Robe’s Mexican distributor.

Pointes were chosen after various options were considered. Apart from being well impressed with the lights themselves, Miguel and Manolo wanted the warranty and outstanding technical and after-sales support.

The Pointes are in constant use – Lip Sync Mexico – a battle between celebrities to prove their lip syncing talents, the musical show MYST, InBox boxing and Mexico’s Got Talent – are just a small sample of the shows on which they have impacted.

They also have some older Robe fixtures – ColorWash 1200E ATs - which are still going strong and were used, amongst other lights, on the Pope’s Mass Mexico earlier in the year. They also regularly use Robe’s LEDBeam 100s and LEDWash 1200s in their work.

Talking more generally about Robe as a brand, Miguel comments that there is “a great range of good quality fixtures”.

Manolo says, “Robe is definitely growing constantly right now. It’s an independently owned company and I think that’s reflected in the overall quality of the products and the technical service which is excellent”.