Robe For Starlight Express in Johannesburg

It was the first ever non-replica interpretation of ‘Starlight Express’ ever licenced by Lloyd Webber’s Really Useful Theatre Company since the show’s inception in 1984, which brought an additional edge and frission of excitement to the production.
In the overhead lighting rig were 18 x Robe ROBIN MMX Spots and 18 x Robe ColorWash 700E ATs. The majority of the fixtures – which also included other moving lights, generic and LED fixtures - had to be rigged here due to the construction of the set design.

However there was room on the set’s scaffolding framework to create some individual side light positions, which were eagerly seized and rigged with 12 x Robe ColorSpot 700E ATs and 18 x Robe LEDWash 600s. These high side positions ensured that they could be kept out of the performers’ eyes – dealing with an adrenalized skating cast they adopted the same approach as if lighting circus performers. 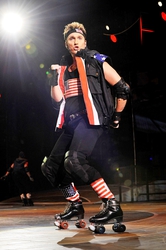 One of the starting points for the lighting design was to make it big, bold, spectacular and rocktastically true to this genre of rock musicals.
The MMX Spots and ColorWash 700s are owned by the theatre and form the core of their house rig. The additional 30 Robes were rented in from Johannesburg based theatre specialists, Splitbeam.

Randall explains that although at the Joburg Theatre having Robe’s in house partly dictated the choice of moving light fixture, he has always liked Robe’s range and was “Very confident” they would be able to help him “Achieve the specific visuality I wanted for the show”.

He was impressed with the output and performance of the MMX Spots, which were rigged at a 9.5 metre trim – much higher than the standard 7 metres for the venue - necessary due to the way the set was constructed. It was the first time he’d used MMXs on a show, although he’d ‘test-driven’ one in London beforehand.

Randall - now UK based - first used Robe products on an opera at the SA State Theatre in Pretoria around eight years ago. The SA State Theatre also has Robe moving lights integral to their house systems and continually upgrade their stock.

In this instance his choice to add extra Robes for Starlight was simple - it made sense to have ‘family’ related fixtures which in turn accelerates the programming process as all the fixtures share the same basic characteristics and parameters.

Randall admits that he’s often been a vocal sceptic about the whole LED phenomena, “But in spite of that and myself .. I DO like the LEDWashes,” he insists, saying “They are quick, with good colour options and a very usable zoom - powerful tools that I would not hesitate to use again”.

The biggest creative challenge – of many – on ‘Starlight Express’ was the sheer scale of the production. In total there were over 600 lights and 8 x DMX universes running into the ETC EOS console that was programmed by Glenn Duncan.

Declan’s lighting certainly also attracted the attention of the critics:
“… with spectacular effects including a multi-layered set, characters appearing in mid-air, skaters whizzing up, down and around and superb lighting to stoke the power-packed atmosphere…” enthuses Lesley Stones in Artslink.co.za; “Declan Randall’s lighting sparkles from beginning to end” states Diane de Beer in Star Tonight; and “Declan Randall’s lighting is up to his usual dazzling standard...” affirms Christina Kennedy in Business Day.