With some of the most popular country music stars taking the stage for the event plus a series of unique – and sometimes unexpected – collaborations, the show was kick started with a full on DJ Zedd / Lady Antebellum monster mash-up, setting an absolutely banging tone for an evening that honored the top country artists.

The CMTs present a series of fan-voted awards for country music videos and television performances, broadcast live on the CMT network with voting administered via CMT's website.

It’s Tom’s fifth year designing the event which is high energy and by far the edgiest and most talked and tweeted about country Awards show.

Over the years he has crafted his own distinctive ‘live’ style of lighting for shows like this, taking lighting elements from rock ‘n’ roll, large scale spectaculars and theatre disciplines, an oeuvre which retains all the improvisational drama of live performance with the specific nuances demanded by TV and broadcast.

“With aesthetic values already high, the producers have a wonderful knack for upping the ante every year in terms of presentation and style,” confirmed Tom, adding that … they come to the table with incredible energy  “wonderful ideas and a new freshness,” a process that challenges all involved to keep up!

Tom used the Robe Pointes and the LEDWash 1200s as the workhorse fixtures of the rig, dotted around a network of trussing mainly in the front and ‘mid’ positions above the stage.

“There’s simply so many distinctive looks that can be produced with Pointes,” he commented. “From really potent beam action to stunning gobos and colors, so these fixtures really fit my ‘live’ approach,” enthused Tom, who has used Pointes on numerous projects since the fixture was first launched two years ago.

The LEDWash 1200 is another favorite on the lighting scheme. 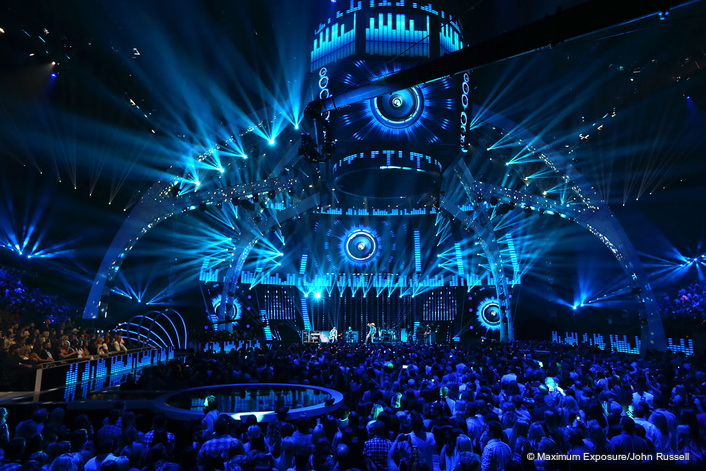 The power and effect of this fixture offers a “Cornucopia” of looks, and the speed and color continue to impress him.

The LEDWash 600s – still holding their own as a premium quality LED wash light – in this case supported the LEDWash 1200s and Pointes, providing general coverage across the stage and set.

A total of six grandMA2s were used for the show … four for lighting control and two to run all the video content.

Tom always works very closely with the scenic department, and for this year, he Anne and Aaron – plus video content producer Laura Frank – all concentrated on creating numerous memorable and elegant complimentary looks that worked as a collective visual collage onstage.

Tom’s penchant for embracing new technology keeps him specifying Robe products which he loves for their distinctive features. He also stated that Robe will listen to “both suppliers and designers, and constantly tweak their product ranges to keep up with demands and ‘wish’ lists.”

“Robe is definitely on-message” in this respect he said.

As with all high profile TV shows like the CMTs, time is always a huge pressure but having a great team working alongside him made communication and producing something memorable, a “demanding but a really enjoyable experience” he recalled.

His hand-picked crew included programmers Michael Appel and Jess Baker, and production electricians Mike Grimes, John Ellar, Mikey Smallman and Stephanie Sheather. Tom includes the “Great” local crew at the Bridgestone Arena together with their “A-list” follow spot operators as integral to the slickness of the production.
VER’s Nashville facility provided both video and lighting equipment.

The show was produced by Michael Dempsey Productions, the executive producers were John Hamlin and Margaret Comeaux from CMT and the telecast was directed by Joe Di Maio with whom Tom has collaborated on many huge shows over the years.

Another great lighting system also designed by Tom – and including more Robe fixtures – was supplied by Bandit Lites for a large stage set up on Broadway, downtown Nashville.

Entertaining the amassed crowds who flock to the city for the CMTs and the CMA Music Festival were a number of superstars including Kenny Chesney, Florida Georgia Line and Darius Rucker. “Bandit did a wonderful job” said Tom, and the CMTs’ broadcast cut to all the action taking place here several times.

Tom added that the warmth and genuine enthusiasm of the Nashville audience once again made the whole CMT vibe extra special, which in turn encouraged all involved to produce another exceptional show.