Robe in the Mix in Mexico 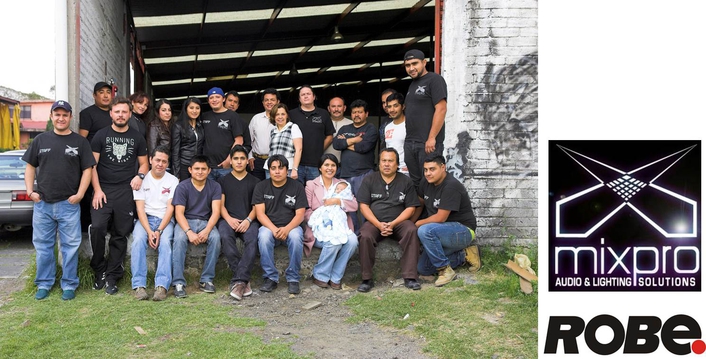 Team MIXPRO at their base in Xochimilco, Mexico City
MIXPRO is one of a number of new rental company clients of Robe's Mexican distributor, Vari Internacional who have invested in Robe products in recent months. The company, based in the lively, colourful and historically significant Xochimilco district of Mexico City, purchased 20 x Pointes which went straight out on tour with Mexican superstar rock singer Alejandra Guzman, whose lighting is designed by Martin Contreras.

MIXPRO's Commercial Director Ricardo Dabne had wanted to expand the company's lighting division with a new moving light purchase, and so began asking people what brands and models of lights they would recommend. This included Martin Contreras, who was one of the first LDs in Mexico to use Pointes on a previous tour.

MIXPRO made the decision to purchase based on this research, on Martin’s good experiences with the fixtures and also the excellent after sales service and support that they were assured would come hand-in-hand when dealing with Vari.

Says Martin, "I really like the power of the lamp, the colours are great and so is the range of gobos and effects. I simply like everything about the Pointe!"

MIXPRO was founded by Miguel Carmona – a well-respected live sound engineer and ‘industry personality’ - in 1998, initially as an audio company. He explained that on the audio side they have d&b, Meyer and Martin Audio products so when it came to choosing a moving light brand they wanted to stay with a premium brand and the most innovative products!

"We were immediately attracted to the fact that the Pointe works equally as well as a Spot, Wash or Beam fixture as this gives us a huge scope and immediately many more options than a standard moving light which is just one ‘type’ of light." He adds that the optics are smooth and the unit is exceptionally fast.

Commenting on the Robe brand generally, Miguel says that he's also looking closely at Robe's LED products. "No other manufacturer is making fixtures with as much innovation and functionality as Robe at the moment," he states.

MIXPRO has always been based in the creative melting pot that is Xochimilco. "The best place in the world," claims Miguel with huge pride! They now have 30 full time employees and collaborate with many long term freelancers, providing full production for a wide variety of shows and events - from music to corporates, socials and parties.

The market is buoyant at the moment - although highly competitive - and a testament to the fact that MIXPRO is getting several things right as they are extremely busy.

MIXPRO supplied sound, lighting and video for all the Mexican dates on Alejandra Guzman’s latest tour and Pointes are also now on the spec for any shows she played in the US, where she also has a substantial following. One of the highest profile artists in Mexico today, the singer has sold over 10 million albums and clocked up over 30 Top 10 chart hits! Due to her immense popularity, she plays around six concerts per month most of the year.

As well as working on some of the larger international shows in Mexico supporting PRG, other regular MIXPRO clients include popular local artists like Pepe Aguilar, Sasha, Benny & Erik and Cafe Tacuba.

Additionally, they look after all the house lighting and sound requirements in two busy venues - the Auditorio Blackberry and Foro Indie Rocks.

Martin, Miguel and Ricardo all attended Robe’s recent BMFL World Tour demo organised by Vari ... And are extremely keen to get some BMFLs in the company ... So watch this space!