.
American jam band moe. thrives on spontaneity for their improvisational music. No two nights are the same. However, their lighting designer Preston Hoffman needed reliable fixtures he could rely on night after night giving the same steady performance. He now counts on Robe ROBIN Pointes and ROBIN LEDWash 300s for the features and flexibility he needed for their recent East Coast U.S. winter tour.

Due to availability, he needed three companies to supply the gear. The main vendor was KM Productions of Long Island, New York, supplemented with Pointes from Main Light Industries in Wilmington, Delaware and LEDWash 300s from TERI Productions of Knoxville, Tennessee.“This tour featured a lot of firsts for me,” said Hoffman. “It was my first tour with Moe., - a jam band that became popular in the early 1990s - and the first time I have toured with primarily Robe fixtures.”

The band’s history includes 24 albums, scores of festival dates and fundraisers, and a tribal traveling fan following (who call themselves moe.rons). Much like their unpredictable music, there was no real creative direction that Hoffman had to follow, or a set to design around.

With this freedom to design and having seen several Moe. shows in the past, he understood the look the band was going for. “My goal was to bring in some new, innovative equipment and looks for the band,” he explains.

He wanted to replace the large lighting products they previously carried with more compact, energy efficient fixtures - but ones that were also feature-rich for clubs and cramped venues where it’s difficult to rig lights.  Hoffman was impressed by his first encounter with Robe Pointes on the European festival circuit last summer - although the festival environment was not the best place to test-drive a fixture. So recently in Nashville, he placed 16 x Pointes in the rig for The Warren Haynes Xmas Jam … and knew that he found the perfect fixtures for Moe.

“Moe. has always had an aggressive light show, and the Pointes are punchy and graphic when in beam or spot mode. This provided the big looks in the various sized venues, and I had the option to hang them wherever I could with the ability for wireless control using three universes of Lumen Radio wireless DMX.”

“There were four black trussing towers - 2 at 10 foot and 2 at 15 foot tall - with cross pipes at different levels, and I just spaced out the Pointes at a variety of heights. This gave the illusion that they were floating and there was no structure. The Pointes are so light, at 33 lbs, I could really stack quite a few on each tower without a weight problem. I climbed a ladder with one in my hand and hung them by myself 15 feet in the air without a problem. Sometimes if I couldn’t hang truss, I would place six Pointes on the floor on road cases. 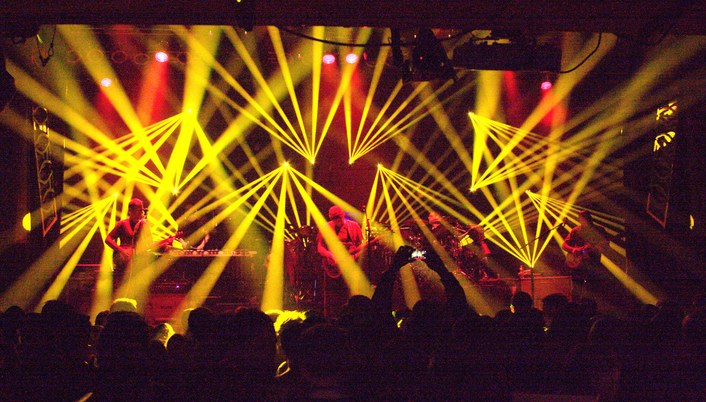 “The Pointe is a low power, high output lightsource that is very versatile. I used them as spots, beams and washes at different times and filled the room with big looks. The Pointes also served as my wireless home runs, so the whole lighting rig was a giant opto-splitter and I could pull DMX from anywhere. In small rooms when I couldn’t fit in all the hung lights, I put them wherever they would fit, on sub stacks or in-house truss … or wherever I could get power.”

Hoffman found the Pointes full of great features, from the tight beam to the fat beam, the gobo selection, the color wheel choices and the ability to use one or two prisms for ‘wow’ factor effects.

The LEDWash 300s were positioned either on the floor and used as footlights or on the in-house trusses. They filled the space with wash light for the Pointes to play off. “They offered a great band wash, which is what I used them for specifically. I also liked the effects I could create using the lens control in the concentric rings and zoom.”

Now that he’s “discovered” more Robe products in the U.S., Hoffman is paying attention to the Czech Republic-based manufacturer.

“Robe is making some interesting fixtures that set them apart from the ‘norm.’ The Pointes are great for the club and theatre level as a primary fixture and they hold their own on the arena level as well.

“I like the way Robe is moving and will be specifying more Robe gear on my shows,” he concluded.