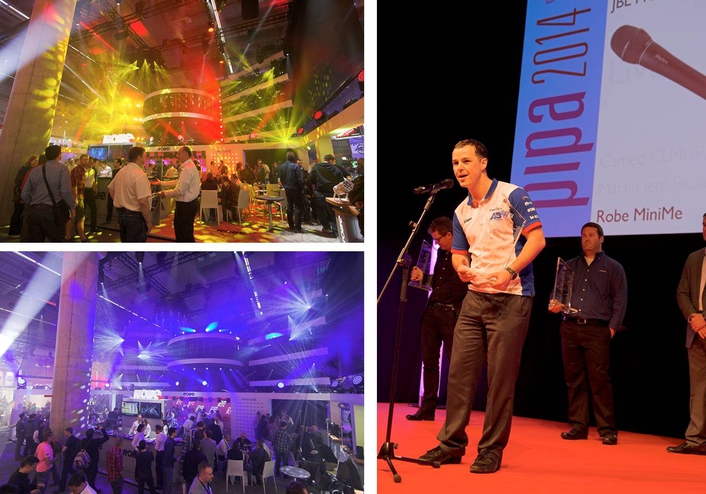 Robe's busy stand - Jiri Baros, Robe's Marketing Manager collects the 2014 PIPA Award for ‘Lights FX’ won by the ROBIN MiniMe
Robe once again enjoyed a massively busy and successful Prolight+Sound exhibition at the Messe in Frankfurt … launching a selection of new innovations and presenting another eye-catching  lightshow on the booth in Hall 11, which attracted huge numbers of visitors to the stand and created a buzz which resonated throughout the entire trade show.

Other highlights involved the inventive ROBIN MiniMe winning the Prolight+Sound International Press Award (PIPA) for ‘Lights FX’ [sic], and for the second year, the Robe team was joined on the stand for one day by Czech MotoGP rider Karel Abraham and his bike. Robe is one of the sponsors of the 2014 season. 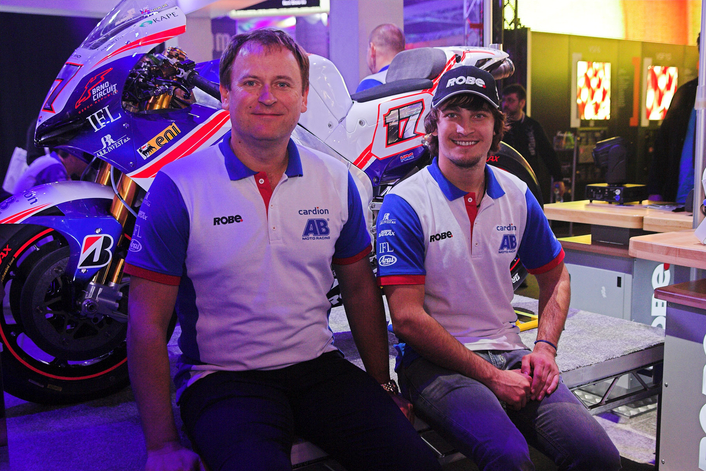 Robe’s CEO Josef Valchar says “The show was fantastic! It is currently the best of its type in Europe for attracting quality international and leading professional visitors, and is a great showcase for our brand.”

The company also celebrates the start of its 20th year of business!  Josef Valchar – one of the founders, attended Prolight+Sound in 1994 … with many dreams and ambitions!

Exciting new Robe products included the ROBIN 1000 LEDBeam and the CycFX 4 moving lights and the PARFect 100 … together with the first in a line of brand new battery-powered LED range, the LiteWare HO (High Output) and LiteWare Satellite.

The Actor 3, 6 and 12 LED theatre luminaires were re-launched with a new and ultra smooth dimming curve and other enhancements.

All Robe’s current products received lots of attention including their fastest-ever selling Pointe and the LEDWash series, which has now become an industry standard LED wash luminaire.

Robe’s friendly and informative multilingual team on the stand included representatives from all the key European distributors and others including South America, the US, Africa, India, Asia and Australia.

Sales Director Harry von den Stemmen comments, “The show was excellent in every way and confirmed many things. It provided great feedback for both our current and future product plans and we are really satisfied with the amount and type of people who came to see us from all over the world”. 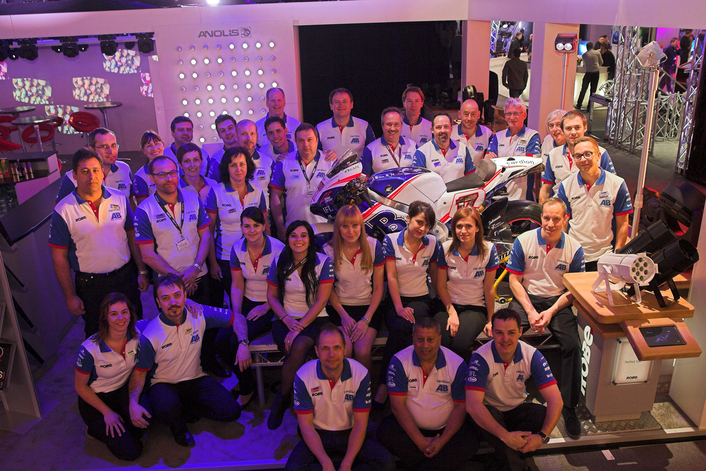 Robe was just across the aisle in Hall 11 from German distributor LMP who also had a large stand. The positioning reinforced the harmony and commercial synergy between the two companies – Germany is currently Robe’s largest European market – and extended the space and capacity for meetings and  discussions – as at times the Robe stand was so full that no more people could fit on to it.

The Robe booth was also the major social hub of Hall 11 with its incredible vibes, daily end-of-day happy hour  … and people clamouring to catch the half-hourly lightshow created and programmed by Nathan Wan.

Prolight+Sound in Frankfurt has grown steadily into one of the most important entertainment technology trade shows in Europe, with an ever increasing mix of exhibitors and visitors from around the globe, and this was reflected in the first ever PIPA Awards, run concurrently with the MIPA (Music Messe International Press Awards) in their 15th Year.

The MiniMe proudly adds its PIPA to other awards it has collected, prompting Robe’s Marketing Manager Jiri Baros to state, “Winning the Award – as voted by over 100 industry trade publications worldwide – was the ‘icing-on-the-cake’ of an amazing Prolight+Sound for us and underlines Robe’s commitment to innovation and excellence. The Award is a great present for Robe’s 20th birthday celebrations.

“We hope the interest we experienced at the exhibitions will be a good sign of how the rest of the year will unfold”.