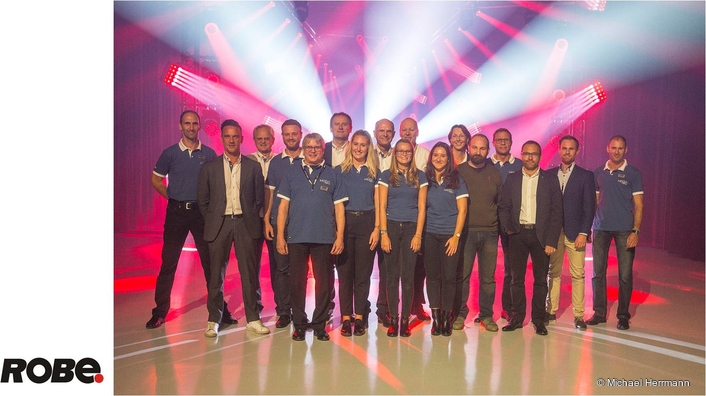 A slick and streamlined event enabled guests to tour the new office, warehouse and Light Lab facilities, then experience a specular lightshow designed, programmed and operated by top Swiss LD Ronald Huber, illustrating the many features and functionality of the new MegaPointe, together with other versatile fixtures from Robe’s current ranges.

The show was staged in a nearby venue hired to ensure there was enough space to optimise and properly show off the intensity and power of the MegaPointe.
The exciting hi-energy lightshow was enjoyed by many individuals – lighting / visual designers and other creatives, programmers, technicians – and those from a diversity of organisations – venues, TV studios, theatres, rental companies – most of whom stayed for several hours and enjoyed the networking and lively, stimulating environment.

In addition to enjoying the spectacle, guests could see products close-up and engage in a number of full demonstrations including the DL Series, the VIVA CMY and the RoboSpot series of follow-spotting products.
Robe Deutschland GmbH is a wholly-owned Robe subsidiary launched in April at the Prolight+Sound exhibition in Frankfurt.

It enables Robe and sister architectural LED brand Anolis to work more directly with its clients, end-users and advocates throughout the key European market of Germany and deliver the superlative service for which it is known.
The German team includes CEO Dieter Gross and CFO Martin Lönner, working with four leading area sales managers, Olaf Nehrenheim located in the west, Martin Opitz based in the east of the country plus Stephanie Walloner and Michael Herrmann who are covering the south.

The substantial HQ, back office and administration operation is being managed by Natascha Christophersen.
Robe DE’s Ismaning HQ is near to the major transport hub of Munich for a wealth of connection options nationally and internationally via road and air. It is also placed for efficient physical access to Robe’s manufacturing base in the Czech Republic and the company will be ideally placed to collaborate with other European distributors in Robe’s global network.

A full service department is operational in Ismaning to ensure any maintenance and support business is dealt with quickly and efficiently.
In less than six months, Robe DE’s HQ and sales operation has been set up and energised from scratch.

The first exhibition for the new company was Stage Set Scenery in Berlin which was a great success. The inauguration of the office and the MegaPointe launch are both landmark events that have attracted intense interest and raised the profile further.
“We are extremely happy that all our German customers have direct access to our brand via this highly talented, experienced, well-connected and enthusiastic team” stated Robe CEO Josef Valchar, who led a contingent from the international sales and project team attending the office inauguration and MegaPointe launch event.

Robe’s Sales Director Harry von den Stemmen added, “This event was a great success, the office and the MegaPointe were extremely well received and we look forward to a positive and proactive future in Germany with plenty of business opportunities”.