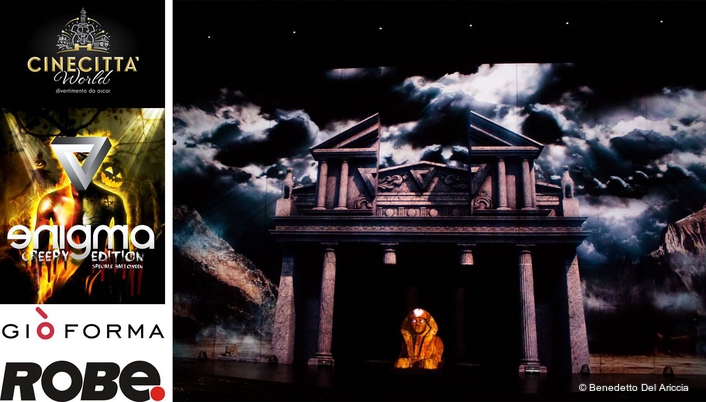 .
‘Enigma’ is a spectacular stage-show and centrepiece at the new Cinecitta World visitor attraction in Rome - the first theme park dedicated to the fabulously rich world and history of Italian cinema – which has spawned numerous genius directors like Federico Fellini, Michelangelo Antonioni, Franco Zeffirelli and many more.

Lighting for the 25 minute Enigma show – produced by FilmMaster and staged in a 1200 capacity venue right in the centre of the complex - has been designed by internationally renowned LD Giovanni Pinna who specified a fully Robe moving light rig.“

’Enigma’” is a highly visual show,” he explains, “It’s designed to illustrate the boundaries and the scope of illusion – one of the essential vehicles of filmmaking and storytelling”.

It’s a mixed media performance set to especially composed music featuring dancers, mapped projections and lighting all as characters in the show, and can be viewed by visitors at any point in their journey around Cinecitta World.

The set – designed by Studio Gioforma – is made up of multiple layers and projection surfaces (word missing here?) plenty of depth, so Pinna’s lighting design emphasises this perspective whilst also adding drama, excitement and anticipation for what the audience will experience during their ‘adventures’ at Cinecitta World.

The brief for lighting meant being theatrical and intimate and simultaneously adding a sense of scale and spectacle – just like the cinematography of epic movies!The Robe fixtures he chose are 11 x DLS Profiles, 11 x DLF Washes, 10 x Pointes and six LEDWash 600s all from Robe’s ROBIN range.

Pinna - LD for a slew of high profile clients including iconic singer Vasco Rossi - has been using Robe products in his work for the last 10 years.

For this he wanted to use as many LED and small-but-powerful fixtures as possible, both for aesthetics and practicality, and felt that “Robe was the only brand able to offer such a versatile choice”. 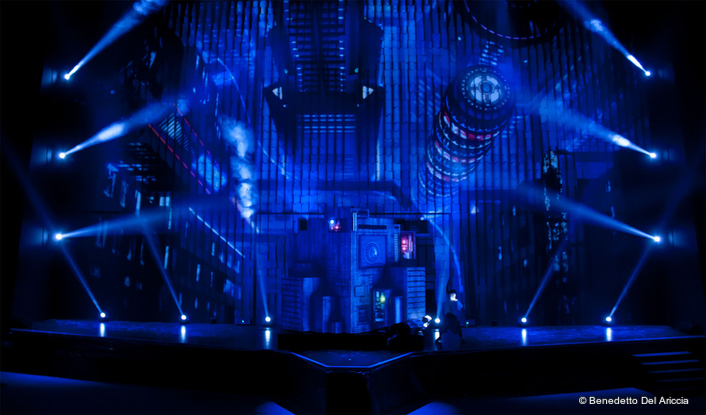 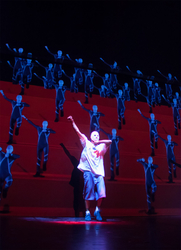 With the show scheduled to run for at least three years in its current format, they sought a rig that was firstly reliable with lightsources that would not deteriorate, and secondly would be as low maintenance as possible… as well as offering numerous creative options for lighting the work in a memorable and eye-catching style. “Robe – again - was the obvious choice,” he confirmed.

And, whilst they are not expecting to need it … he added that the “Excellent” service and after-sales support from Cattolica based Italian distributor, Robe Multimedia, was another factor in the decision.

Enigma’s lighting design is complex, cerebral and was a real challenge for Pinna.A show based around the mysticism and visual magic of the cinema with a critical eye at its core was an interesting concept around which to devise a lighting style, and central to this was concealing the lighting fixtures onstage with as many as possible physically integrated into the set and scenic elements. 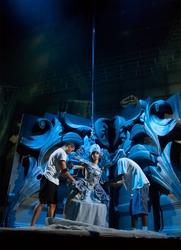 Also vital to the design was the need to keep lighting sources shuttered from the projections yet blending in with them … and tightly focussed on the dancers. He spent a full two days just concentrating on all the areas that needed lighting to follow the five dancers without washing out the stage.

Overall, it was a very different approach and genre of lighting from that of a show or tour. Rather than getting something up and running in a day, here the project evolved over a much longer timescale with everything meticulously thought-through and planned as a permanent installation.

The Pointes are positioned upstage at the back and top and bottom along the sides of the stage where Pinna could capitalise on their multi-functionality – the prism effects, the tight collimated beams and the wide washes are all prominent in the show – all very different looking effects from this one highly flexible fixture.

“Pointe is an excellent beamer first-and-foremost … but also so much more,” he elucidates, “You can get a good wide using the frost, it has a decent zoom plus great prism and gobo looks”.

For cutting and slicing into the space from the upstage and downstage sides, he used the DLFs and DLSs. Their height and areas of operation dictated by the trajectory of the projectors, so the framing shutters on the DLS and the barn door module on the DLF have been extremely helpful in continuing potential light-spill into the projector paths.

“Having the choice of a moving spot with shuttering capabilities was vital to achieve the very precise look I wanted,” he enthuses! 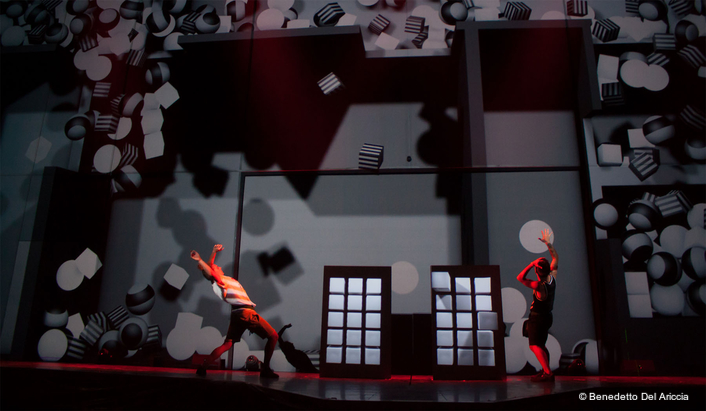 Pinna is also the first person to applaud all the great teamwork involved in making Enigma the creative achievement that it is.

Working directly with him on the 15 intense days of grandMA 2 programming were two of the best console operators in Italy - Davide “Magic” Martire and Marco Piva.Enigma’s Creative Director is Alfredo Accatino. The show has been directed by Romain Sabella, choreographed by Laccio (project managed by Valentina Colarusso) and the Production Manager is Massimo Palermo.