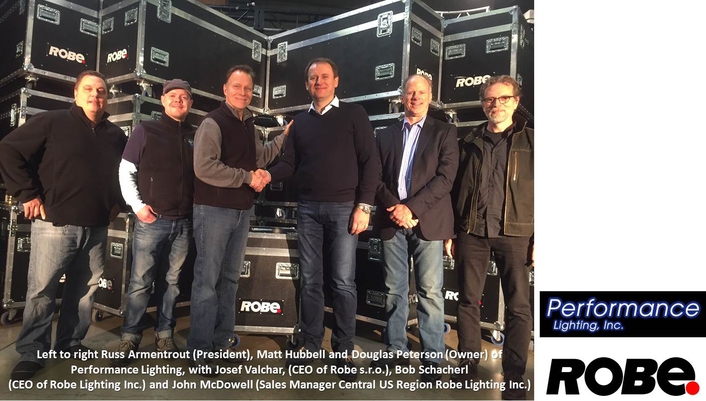 .
Chicago-based Performance Lighting is another leading U.S. company to recently invest in Robe – with the purchase of 30 x BMFL Spots and 12 x Pointes.

The busy design and rental facility supplies lighting to all sectors – from corporate and industrial to music festivals,  concert tours, TV and theatre productions … and this year Performance celebrates its landmark 30th anniversary.

Everyone is delighted with the new fixtures, and Performance Lighting’s President Russ Armentrout emphasizes the fact that this is the first - but certainly won’t be the last - Robe purchase!

CEO and company founder Douglas Peterson decided to invest big in BMFL after doing a light-metered shootout at his shop against well known ‘competitor’ products.

"In my opinion, the BMFL overwhelmed the others, and its feature set was so rich that I knew it could replace any light on any rider request …. as well as be an awesome tool for my own LDs."

He added Pointes to the order for their low profile versatility, and because both Russ and Performance production manager Matt Hubbell, said that they could “kick butt” with them in marketing.

Douglas was confident because over the years, “Robe has really built a reputation for quality in the demanding U.S. touring, rental and staging marketplace”.

He had been looking for a “superior” lightsource to fuel his latest round of reinvestment, and as soon as BMFL production units became available, he set up the shootout.

A demo unit was requested and dispatched by Robe Lighting Inc., and Performance tested all the attributes – lumens, output in all colors, the color-mixing stream, the zoom, the hot spot control, etc. - it was exhaustive.

Their findings indicated that the BMFL offered almost twice the brightness of the competitor’s products!

Russ says that the testing was the “most thorough” comparison and product research undertaken before a purchase in his 26 years in the company!

The decision was made, the order placed and the BMFL Spots were delivered and went straight into action.

They graced the main stage at the 2015 Summer Camp Festival headlined by jam band moe. and everyone raved about the lights, especially moe.’s LD Preston Hoffman, who was the first LD in the U.S to use BMFL Spots for an architectural lighting installation at Boston City Hall for the 2014 Boston Calling music festival.

Rockers Alabama Shakes utilized BMFL Spots as wash lights for a recent concert, and eight units were the major effects fixtures for a local one-off by maverick heavy metal band Judas Priest. They were also in action on a recent Pixies show, and Performance has earmarked them to illuminate the national HQ of Allstate Insurance in Northbrook Illinois, where tests showed that one side of the entire building can be covered with two BMFL Spot units.

Russ likes the “beautiful colors” and “amazing” animation wheels, and added that he also has no problem persuading any LDs who might have alternative fixtures on their riders ... to use BMFLs instead!

Performance plans on designing them into R Kelly’s upcoming tour and they have also been in demand as a cross rental item. “It’s an absolute game-changer in the U.S.” declared Russ, adding that the customer service and support from Robe Lighting Inc. in Florida has been “impeccable”.

Their BMFLs recently hit the road as part of a floor package for high profile Atlanta heavy metal band Mastodon. Performance Lighting veteran LD Michael "Slim" Howe called Russ a couple of days later saying that on the second gig the band had asked what the lights were – the first time in 5 years that he recalls any of them noticing any lights! Slim apparently commented to Russ that the BMFL Spots were the best design tools he has ever used.

Both BMFL and  Pointes wowed the crowds at a Griz show at Chicago's historical Aragon Theater and Performance Lighting's LD Joe Watrach used Pointes on his recent Motionless in White tour … and loved them. The 2015 B96 SummerBash will also feature the BMFLs and Pointes in full array.

Douglas mentioned that his brother, industry veteran LD Bob Peterson (also the co-founder of Performance Lighting), recently visited Robe's shop in Florida and confirmed that he had made the right decision to purchase BMFLs.