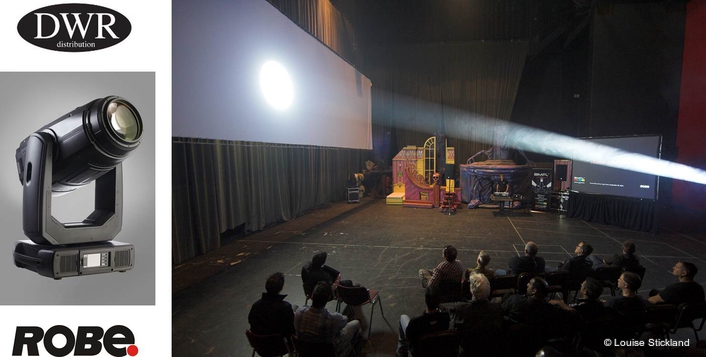 For the first launch event in Cape Town, Robe’s CEO Josef Valchar also jetted in to help get the SA BMFL Spot launch off to an amazing start!

All who have seen the fixture have been hugely impressed!

The Cape Town event took place at the Grandwest Arena, a venue chosen as it was important to demonstrate in a large space so guests could appreciate the sheer power -  a staggering 250,000 lux at 5 metres - and throw capabilities of the BMFL Spot.

A constant stream of visitors all day heard a brief introduction to the technical features followed by a presentation highlighting how the BMFL Spot has already been used on several high profile events this summer – the Glasgow 2014 Commonwealth Games Opening and Closing Ceremonies in the UK (LD Tim Routledge); the launch of superstar DJ David Guetta’s new live show at the Global Gathering EDM extravaganza in the UK (LD Jonathan ‘Leggy’ Armstrong); the glittering Teen Choice Awards in Los Angeles (LD Tom Kenny) and in Arena 13 at the 2014 Tomorrowland dance experience in Boom, Belgium.

Following that, everyone had the chance to get close-up to the fixtures and see for themselves what a game-changer this really is!

This includes a weight of just 36 Kgs with a compact body; a CRI of 90/92 and a refined optical system offering a fabulous 5 – 55 degree zoom and a crisp, high quality truly homogenised fat beam without a hotspot!

New colour mixing technology can produce all colours in the spectrum and there are two colour wheels, two Rotating Gobo Wheels, two Rotating Prisms and Dual Graphic Wheels among the major creative tools, plus three grades of Frost and an exceptionally smooth, distortion-free dimmer.

Two days later the DWR and Robe demo teams reassembled at the Joburg Theatre in Braamfontein, downtown Johannesburg for another lively session with the team.

This time over 100 people rocked up over the course of the day, all keen to see the hugely anticipated BMFL Spot in action – and make an informed assessment about its abilities and value.

This included a contingent of 12 from Durban who flew up specially.

At one stage, four of the country’s top lighting designers were all in the room at the same time, discussing the fixture and comparing opinions!

Duncan Riley reported, “We expected a lot of interest, but the response was incredible – way beyond our expectations. It was important to show the BMFL Spot in a large space and once you opened the shutter everyone could see for themselves what all the noise has been about!

It’s an amazing fixture and when Robe claim it’s ‘the best’ they have ever made  ... they are absolutely right!”