The show was staged in the 2500 capacity Super Theatre auditorium at Earls Court Exhibition Centre in London and presented by three of the regular Channel 5 TV show anchors Jon Bentley, Jason Bradbury and Pollyanna Woodward, who were joined on screen by the fourth member of their team, Rachael Riley.

Three pacey 75 minute shows were staged each day, based around the 12 days of Christmas theme and showcasing some of the best, most interesting, inventive and fun currently available consumer technology.

Right at the top of the show Robe received a big shout-out from the hosts for slashing the energy consumption of the live show’s lighting by over 50% from last year!

“I really wanted to use as much LED product as possible for obvious reasons,” explains Sinclair, “As well as some of the most innovative lighting products on the market in keeping with the whole event’s high-tech emphases”.

He adds that he was delighted to be able to utilize Robe equipment, which was supplied by High Wycombe-based rental company Siyan, who have a large stock of Robe fixtures.

A catwalk stage in the middle of the room traversed two large seating banks either side, with two trusses flown above running the entire length of the stage. At the entrance / exit end, was a seven metre tall Christmas tree.

Each of the 12 ‘Days of Christmas’ sections highlighted a different piece of technology, with a product or an associated product placed under the Christmas tree. Audience members texted in their names and at the end of the show, one lucky person was randomly picked as a winner of all 12 presents!

Sinclair used 17 x LEDBeam 100s on the truss and the floor to do this together with ten MiniMes, six on the floor and four on the truss. 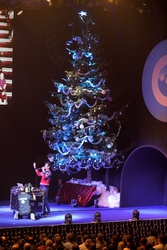 He ran video content from the MiniMe’s onboard media library to make the tree shimmer, sparkle and come alive, creating a whole range of different looks and ambiences.

“They are absolutely wicked” he enthused about the MiniMes. “The output is fantastic for the small size”. They were also probably the most sophisticated Christmas tree lights that he’d ever used – in true Gadget show style!

Choosing any of the 255 onboard video clips was “Just like selecting a gobo” he reports. Some of these are moving clips and some are still images that can be animated or manipulated, shuttered, keystone corrected, etc.

During the show’s spectacular opening son et lumière sequence, the MiniMes showed their versatility and flair when used to project patterns onto the silk wings costumes worn by two of the dancers.

Above the stage on the trusses were 28 x LEDWash 600s, 22 x DLS Profiles, 10 x MMX WashBeams and eight MMX Spots all used for general stage lighting.

It was the first time Sinclair had used the DLS Profiles with which he was also “Very impressed” especially with the brightness. He made extensive use of the MMX Spots to stripe the stage floor and the white masking drapes in the roof with rich colours and vivid gobo patterns.

The theatre show was a massive success, appealing to all types of tech enthusiasts,  geeks and gamers with its eclectic collection of gizmos, which  this year included a giant version of the Combat Creatures Attacknid robot, the new Sony PS4 and the slightly ridiculous ‘ready-to-wear’ “chair-pants’ – what they lacked in fashion cool they certainly made up for in laughs!