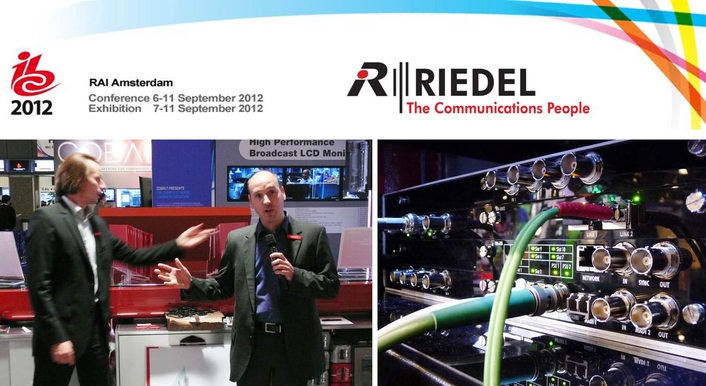 Andreas Hilmer and Thomas Riedel at IBC 2012
Riedel MediorNet is a fiber based real-time network for 3G/HD-SDI video, audio and data that goes beyond the common video transport solutions. In addition to the integrated transport of HD video, audio, data and communications signals, MediorNet also provides integrated signal processing and conversion. This reduces the number of external processing devices significantly.

The HDP-6-IO auto senses the connected signal format and can work with simultaneously with HD and SD inputs and outputs. The MediorNet MN-HDP-6-IO HD SDI video card offers two inputs, two outputs and two universal connectors that can be defined by the user as inputs or outputs. The conversion is controlled via MediorNet user-friendly configuration software MediorWorks. Each process can be easily selected and applied to the desired signals and outputs via drag&drop menus. Since the processing is available as a system wide resource making the conversion available at any output of the system, it allows for flexible setups and short notice changes to play-out scenarios.

The new MediorNet MN-GV-2 card allows the user to network Grass Valley 3G camera systems and base station including the LDK and the brand new LDX series via MediorNet. This provides a solution for routing bi-directional camera signals including all embedded audio and telemetry control data through the MediorNet fiber infrastructure. MediorNet’s network approach allows the free assignment of cameras to any Base Station / CCU within the network, providing unparalleled flexibility in set-ups and eliminating the need for re-wiring when production configurations change.

Solid State Logic and Riedel Communications developed in close collaboration the next generation RockNet firmware for the RockNet RN.334.MD MADI interface that allows intelligent interfacing between RockNet Digital Audio Networks and SSL mixing consoles. This makes the SSL console an integrated part of the RockNet system including remote control of all gains and the flexibility of RockNet's renowned and unique Independent Gain feature. Independent Gain allows several mixing consoles to operate with the same mic pre-amps without affecting each other. While the master-console is controlling the analog gain of the pre-amps remotely, all other consoles operate with emulated pre-amps just as if they were also controlling the actual mic input. This makes multi-console and recording setups very convenient. 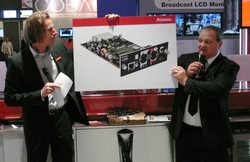 The new RN.344.SI card provides RockNet integration for any Soundcraft SI Compact console via the console's expansion slot. In its first firmware release the card supports 32 inputs and 32 outputs to the RockNet system. A wordclock output is available at the front panel. A rotary switch is provided for device identification and selection of up to 16 programmable routing tables. The RN.344.SI enables the respective Soundcraft product to become a part of the RockNet digital audio network and enables remote control of any RockNet microphone pre-amplifier. The RN.344.SI also supports RockNet's Independent Gain Feature.

The portfolio of RockNet interfaces for console integration includes dedicated solutions for Yamaha, Studer, Soundcraft and SSL consoles as well as a MADI unit for integrating consoles from additional brands. RockNet allows consoles from various manufacturers to operate simultaneously within the same audio network.

RockNet is a digital real-time audio network that provides up to 160 digital audio channels over a single counter-rotating CAT-5 ring. RockNet offers supreme audio quality with up to 96 kHz/24 bit and a dynamic range of up to 117 dB. Based on a redundant ring topology, RockNet forms a self-healing redundant network with no loss of audio in case of a connection fault between two devices.

Riedel Communications Celebrates Its  25th Birthday
What started as a radio rental company grew to become the leading provider of solutions for communication as well as wired and wireless signal transport for video and audio. Riedel’s solutions have been embraced at numerous international events including Formula 1 races, World Championships and the Olympic Games. Leading broadcasting companies, prestigious theaters as well as governmental and industrial facilities have also utilized Riedel systems and services. 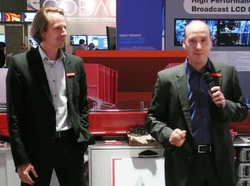 "When I started Riedel, I would have never thought the enterprise would develop in such a way. I would like to thank all of our customers, the press and of course the entire Riedel team for their support and dedication," said Thomas Riedel founder and CEO of Riedel Communications.

About Riedel
Riedel Communications designs, manufactures and distributes the most pioneering real-time networks for video, audio and communications for broadcast, pro-audio, event, sports, theatre and security applications worldwide. The products reflect today’s leading-edge technologies that translate tomorrow's demands into today's solutions. The company also provides rental services for radio and intercom systems, event IT solutions as well as fiber-based and wireless audio & video transmission systems for large-scale events such as Olympic Games or FIFA World Cups. The Company was founded in 1987 and today employs over 350 people located within 11 locations in Europe, Australia, Asia and the Americas.