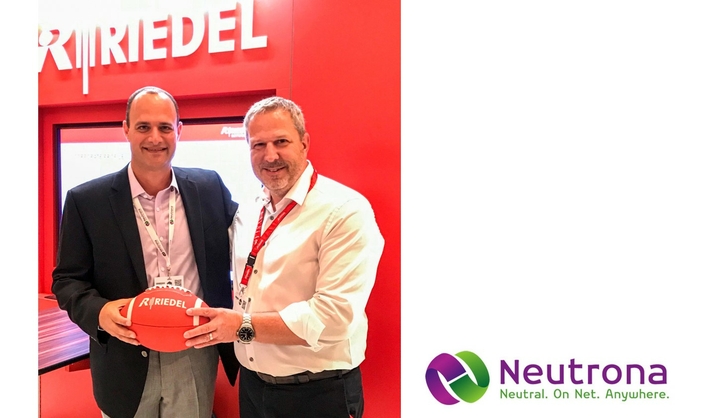 Riedel Networks today announced the completion of its Miami Triangle Project, entailing the opening of a new point of presence (PoP) in Miami and the signing of a bandwidth update contract with Neutrona Networks for the Miami – New York – Sao Paulo circuit. The company also made public that it has once more been named as one of the world’s leading Managed WAN service providers by ISG, an independent technology research group.

During the last week of June, Riedel Networks attended the ITW show in Atlanta, one of the most important industry conferences with more than 7,000 attendees and 2,000 exhibiting companies from 135 countries. The network provider from Butzbach, Germany, participated in more than 100 meetings over the three days with carrier partners, customers, and prospects.

“This agreement opens a new chapter in the partnership between Neutrona and Riedel Networks in LATAM, delivering fully diverse and low-latency connectivity to enable Riedel to provide a superior level of customer experience to their end users,” emphasized Ward.

“In conjunction with our newly formed Miami Triangle, this bandwidth update will ensure secure and reliable access for our customers in the Americas,” Martens added.

The conclusion of the Miami Triangle project brings a wide range of benefits to Riedel Networks and its customers. First, the new PoP in Miami will accommodate the ever-increasing traffic originating from Sao Paulo. Moreover, the triangle construction greatly improves network resilience, as each of the three cornerstones can easily take over the traffic in case of a network failure. And finally, it reduces Riedel’s network coast-to-coast round-trip delay by 11ms.

On top of that, Riedel Networks has again been positioned, for the fourth consecutive year, in the Leader Quadrant for Software Defined Solutions & Services by leading technology research and advisory firm ISG. “We are very happy that our efforts with the focus on global SD-WAN and direct MPLS access have once again been approved by an independent market survey,” said Bernhard Pussel, Head of Sales, Riedel Networks.

Just recently, the company launched its new SD-WAN product portfolio, delivering enhanced security and increased efficiency. “Riedel Networks is the first network provider to use a 100% homogenous hardware and software solution by Cisco,” said Dr. Joachim Sinzig, Director of Product Management, Riedel Networks. “Therefore, our customers can count on the perfect interaction of all components — and on their constant improvement.”

Riedel Networks is an international network provider offering corporate networks and real-time audio and video services via its own MPLS-based network worldwide. Founded in 2001 in Butzbach, Germany, the company today runs an extensive and scalable Cisco homogenous network with 40+ points of presence worldwide. It serves 200+ multinational customers across all vertical industries in 45+ countries. Its outstanding customer service is the basis for solid customer loyalty. Riedel Networks is an enterprise of the Riedel Communications Group in Wuppertal, Germany, and is privately owned by Thomas Riedel.

Riedel Communications designs, manufactures, and distributes pioneering real-time video, audio, data, and communications networks for broadcast, pro audio, event, sports, theater, and security applications. The company also provides rental services for radio and intercom systems, event IT solutions, fiber backbones, and wireless signal transmission systems that scale easily for events of any size, anywhere in the world. Riedel is headquartered in Wuppertal, Germany, and employs over 600 people in 20 locations throughout Europe, Australia, Asia, and the Americas.