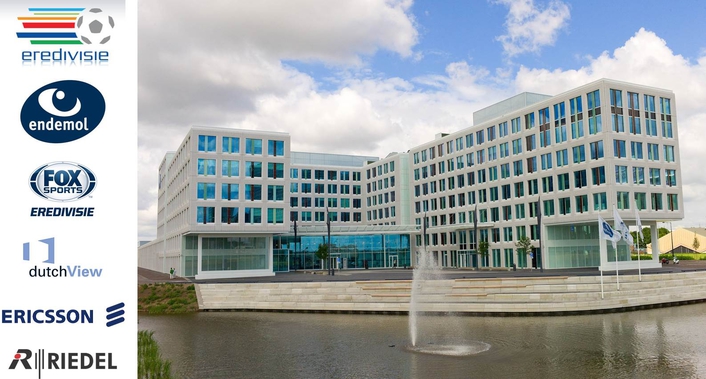 Endemol HQ in Amsterdam
Going into the 2013-14 Dutch football season, Endemol and Fox Sports Eredivisie took on a project that would significantly enhance the quality with which we could produce and deliver live broadcasts of all Dutch Eredivisie matches on the Fox Sports Eredivisie football pay-TV channels. At the Endemol central broadcast hub in Amsterdam, where DutchView provides full-service studio operations, we completed construction of three entirely new HD studios and production galleries dedicated to match-day programming and highlights creation. 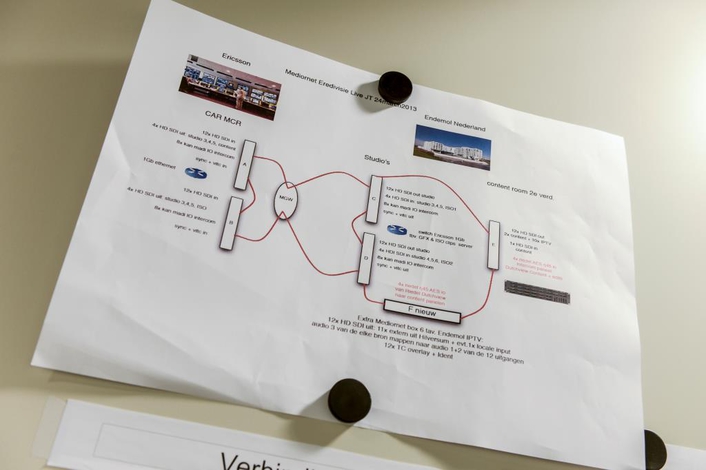 Facilitating lossless transport of up to 24 HD signals, the new fiber link brings live HD contribution feeds from all Eredivisie football matches from the Hilversum facility, the hub for incoming lines and outgoing distribution, to the Amsterdam studios. The same link takes the outputs of the production facility back from Amsterdam to Hilversum for playout. The fiber link has become our connection for everything.

Making a Seamless Connection
The time frame in which we completed the studio complex upgrade was exceptional, taking just a month and a half, and the Riedel equipment played a significant role in making this rapid pace possible. Our shift to fiber and the flexibility and functionality of the MediorNet and Artist systems radically reduced the complexity of the installation, as well as the time and resources required to complete it. Because so much functionality is packed into single boxes, technicians maintaining the link and intercom systems only need to work with and understand Riedel components, rather than a wide variety of boxes and components.

Through this project, we have used two dark fiber links and a redundant MediorNet Compact Pro system to connect the Hilversum and Amsterdam facilities. Each of these two separate signal paths supports 12 HD channels over a different route. In addition to supporting two dozen HD signals, the 57- and 36-kilometer-long connections transport MADI audio, intercom, and data. A Riedel CWDM interface enables the transport of multiple signals over a single optical core. 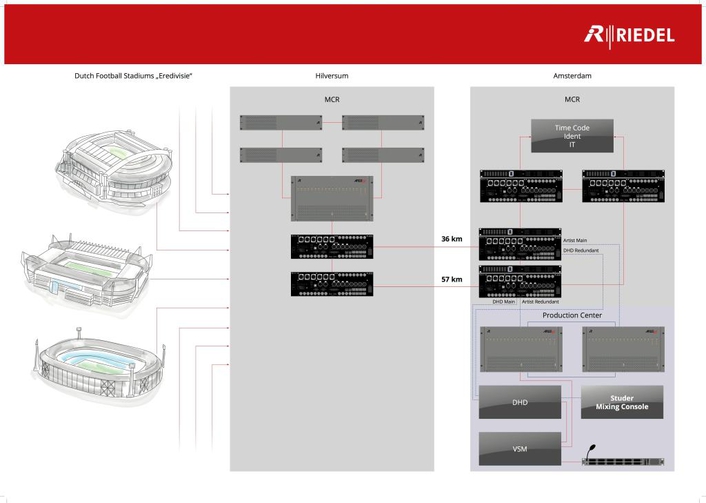 Live match feeds come into the Hilversum hub, and we use the fiber link to bring those feeds to Amsterdam, where we ingest them with EVS into an Avid edit platform for highlights creation and then also distribute them to the studios used by Fox Sports. Within the Amsterdam facility, we use two additional MediorNet Compact frames to distribute the intercom and video signals that connect the studios and post-production area, and to enable jog/shuttle functions for the EVS system. 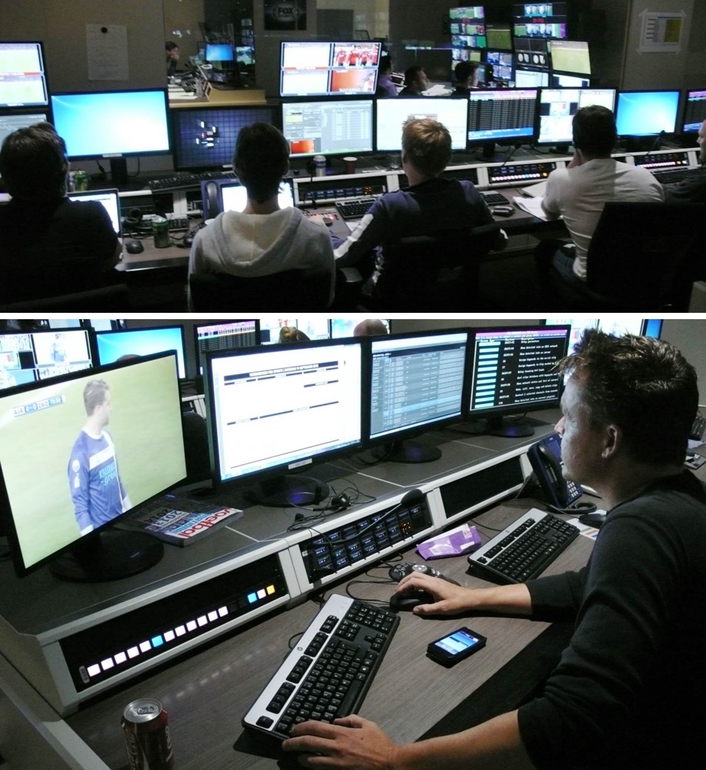 With features such as embedding and de-embedding, frame stores, on-screen display with source information, and LTC time code insertion all coming standard on MediorNet, and with the tremendous flexibility and audio quality of the Artist system, the Riedel systems have provided a versatile yet cost-effective fiber-based communications and A/V transport solution. Using virtually every option of the MediorNet Compact system, we’ve achieved our goal of realizing much greater integration and functionality —and cost savings — with the purchase, installation, and maintenance of fewer boxes.

All interfaces needed for broadcast are incorporated within the MediorNet solution, as is all processing. As we built out the new studio and infrastructure, this robust functionality allowed us to meet our time and budget targets. What’s more, by managing the distribution of the external sync and time code signals of the entire system from Hilversum to Amsterdam, the Riedel system also allows us to integrate the two platforms as tightly as possible. The result has been that our operations have a unified feel. The sports journalists and other staff working in our studio complex are connected to the master control room and media hub as if they are just next door.

Uniting Operations With Intercom
Within the Hilversum master control room, six Riedel Artist nodes not only provide intercom signals for the local control room and studios, but also route MADI audio to two Artist frames at the Amsterdam facility via the MediorNet network. Every incoming feed requires eight audio channels, so this fiber-based approach and ability to use MADI routing on the Riedel system have allowed us to save a fortune in audio de-embedding and synchronization.

MediorNet Frames and Artist Manels at the MCR in Hilversum

Audio routing is performed on the Riedel system, rather than on the matrix or mixer, before it goes into the audio board. The four-wire intercom signals are extracted from the MADI signal to provide for communications between the Amsterdam and Hilversum facilities, as well as OB vans and commentary positions at match venues, and a separate MADI stream is connected to an audio mixer to enable staff in Amsterdam to listen remotely to all incoming audio sources in the Hilversum control room. More than 70 Artist 1100 OLED key panels are used for this application. 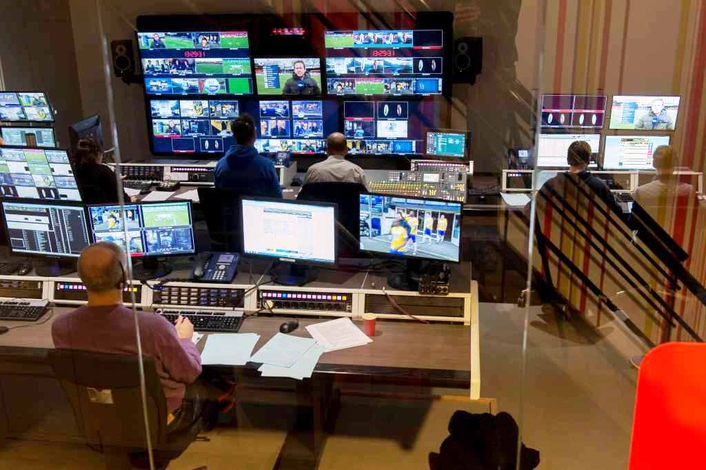 While the Hilversum system uses a mix of Artist 128 and several smaller Artist systems, the installation in Amsterdam consists of two Artist 128 mainframes. Along with a DHD audio router, the installation uses an LSB Virtual Studio Manager (VSM) server in Amsterdam to control the audio router that is used for remote access of the Artist installation and to control the audio router feeding the program audio to the studio speakers. Using flexible control surfaces and intuitive shortcuts enabled via the Riedel Router Control Software (RRCS) XML interface, the VSM control system makes it easy for users to configure and assign conferences, panels, external four-wires, IFBs, and program signals including gain settings.

Taking Long-Haul Fiber Transport Live
We ordered our Riedel gear just three months prior to our new facility launch date. While the distance between Hilversum and Amsterdam was a concern, the Riedel gear performed trouble-free once it was deployed, configured, tested, and tweaked by Ericsson. We tested the fiber link on Aug. 1, 2013, and took the whole system live the next day.

One of the large Studios in Amsterdam

Other than the fact that our overall project timeline was unusually short, we haven’t necessarily done anything groundbreaking in establishing the new communications, A/V, and data link between Hilversum and Amsterdam. What this connection does demonstrate, however, is that fiber can be a very effective solution for long-haul signal transport, and we found a way to do it with less equipment, less money, and no latency. It would have been possible with solutions other than the Riedel equipment, though none offered the same high degree of functionality or overall price point.

With this model, we have been able to transport 24 HD channels at much lower cost than alternative approaches would have cost Fox. In terms of capital investment, MediorNet proved not only less expensive, but also technically superior to the competing system we evaluated. It also affords greater redundancy and scalability, both of which are critical to our current and future production capacity. 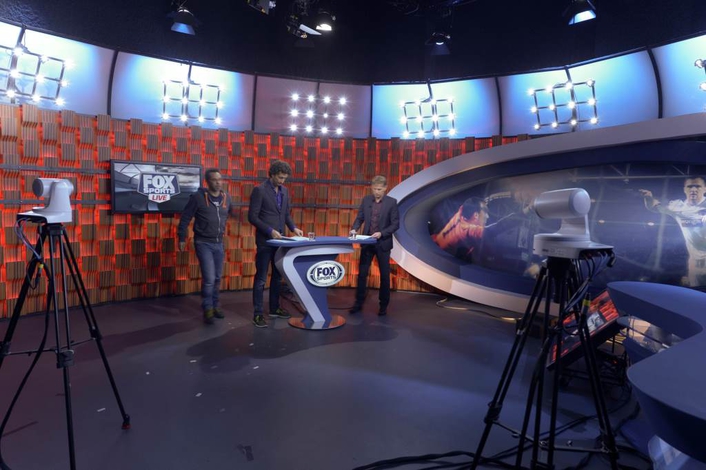 The small Studio in Amsterdam

From the beginning we’ve been very happy with the support we’ve received from Riedel. With offices nearby, the company is well-positioned to back us up. Equally important is the fact that the company understands our broadcast business and our requirements both for the fiber network and for intercom communications. We use these systems daily, and it’s very nice to know we have support, service, and spares close at hand.

Going forward, the modular design of Riedel equipment — and the ease with which a single engineer can configure, change, and control connections and signals — will allow us to adapt or expand the system as our needs evolve.