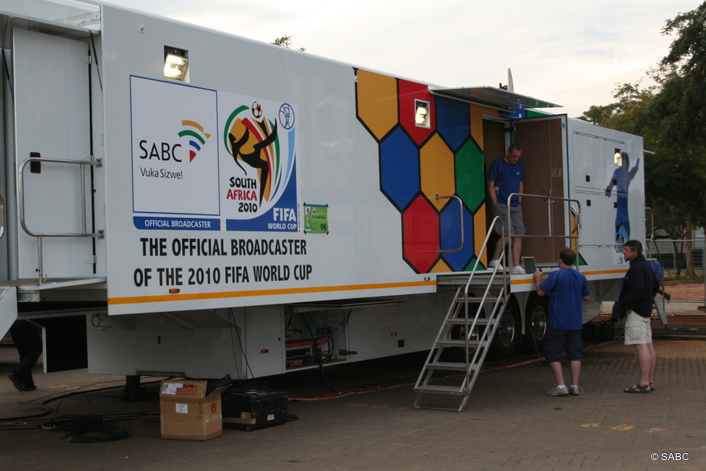 All four OB’s are equipped identically. Weighting 30 tons, they each feature 15 HD cameras (wired for 24) and Three Super Slow HD cameras. Two of the units were finished by the summer of 2009 and they were already utilized for the broadcast of the 2009 FIFA Confederations Cup. The third truck was finished in time to do the FIFA World Cup Official Draw in December and the fourth truck has been delivered in March 2010. As SABC is chosen to be the Official Broadcaster, the four trucks will be used to broadcast of the 2010 Soccer World Championship in South Africa.

All trucks feature one Artist 32 and one Artist 128 mainframe to provide the needed amount of intercom ports. If needed Riedel Artist can be expanded to up to 1,024x1,024 ports in a non-blocking matrix. Both mainframes are equipped with redundant Power supplies and CPU cards to provide maximum reliability.

"Integration of various technologies was one our a major demands while designing the trucks. With such a high-class event as the Soccer World Championships and many other large events it's important that everything works together as smoothly as possible. Riedel's Artist intercom solution not only provides us with the reliability we need but also glues such  important parts as intercom, commentator audio and audio routing together into one integrated network," said Nic Bonthuys General Manager of SABC TV Outside Broadcasts.

MADI client cards integrate the Lawo mc²56 console into the intercom system. Artist's digital broadcast quality audio enables commentator audio directly via the control panels. In total 32 Artist 1000 series rack-mount and desktop control panels are installed in each of the HD OB vans. Riedel fiber modules provide fiber connection for the Artist intercom in all four trucks. The fiber modules are used to connect Artist intercom matrix even over greater distances. This way the trucks can form one great integrated digital intercom matrix.

Artist Connect Solo and Duo integrate POTS and ISDN telephones into the communications matrix. In addition, control panels can be remotely controlled through ISDNs connections with Connect Duo interfaces expanding the flexibility even further.

Riedel Communications – the largest supplier of communications equipment to the 2008 Olympic Summer Games in Beijing – designs, manufactures and distributes the most sophisticated intercom, fiber and radio technology for customers worldwide in the broadcast, pro-audio, event, sports, theatre and security industries. The products reflect today’s leading-edge technologies that expand conventional concepts into tomorrow’s applications. The Riedel group of companies also includes a European based large rental operation that provides radio and intercom services, event IT solutions as well as fiber-based and wireless audio & video transmission systems. The Company was founded in 1987 and today employs over 200 people located within 8 locations in Europe, Australia, Asia and North America.