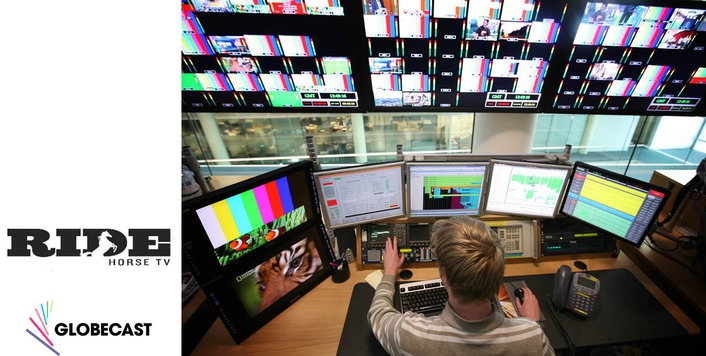 This is the first new channel to be launched since Globecast’s Media Factory investment in Culver City, benefitting from more flexible and efficient content management and delivery. Globecast’s satellite and fiber capacity in North America and the LatAm region, along with its capability to handle the end-to-end service provision, from content ingest, scheduling and origination through to playout and distribution, in-house was a key factor for Ride TV.

A leading cable channel dedicated to horse culture and lifestyle, Ride TV provides 24-hour HD content for its viewers and is available to all the major cable, satellite and pay-TV operators. Ride TV’s content is a mix of reality shows, news programs, talk shows, documentaries, and live championship events.

Commenting on the agreement, Ride TV CEO, Michael Fletcher, said, “Globecast offers us the benefit of having all our content preparation and delivery requirements under one roof. It also means that we can scale up our operations as we need to, without having to make costly infrastructure investments of our own.”  He added, “A big factor in choosing Globecast was definitely their team, their flexibility, and their attention to our needs.  That’s really important for a new, independent network.”

Globecast’s Eddie Ferraro, Vice President Sales and Marketing, The Americas, added, “We’re very excited to sign on Ride TV as our first new customer since our Media Factory upgrades  at Culver City. The upgrades to our infrastructure and the flexibility and scalability that Media Factory offers means Ride TV has the confidence that their operation is completely future proof. We can also provide the ability to easily add distribution to multiple platforms – and devices – as and when they need to, allowing them to adapt to changing viewing habits.”

Globecast Media Factory goes beyond traditional media management, logistics and playout services. It replaces multiple, siloed operations, rationalizing them to create a single, efficient process that handles everything from VoD preparation and content formatting through to creative services, quality control and compliance. Media Factory allows Globecast to pass on economies of scale to customers who also benefit from the greater flexibility and the ability to scale up and down as required.

About Ride Television Network, Inc.
Ride Television Network Inc. is a privately held corporation based in Fort Worth, Texas.  The company was formed in 2011 for the purpose of launching a 24-hour, high definition, television network.  Notable investors and shareholders include John Paul DeJoria, co-founder of Paul Mitchell Hair Care and Patron Tequila and Spirits.  RIDE TV launched October 1, 2014 in the United States and will be distributed internationally in late 2014.  The network has already secured distribution with several cable system operators and one Telco operator.

About Globecast
Globecast opens up global opportunities in broadcasting by making content distribution and management simple. Part of the Orange group, Globecast delivers tailored content management and delivery solutions to meet the needs of markets all over the world. For channels, Globecast provides media management and playout solutions as well as global content delivery via fibre, satellite, and IP. Through its fleet of SNG vehicles and production partners, the company also provides coverage of news, sports, and special events around the globe. Globecast has capacity on all the world’s major broadcast satellites, a three-continent proprietary fibre network and state-of-the-art facilities in the world’s biggest media hubs. Finally, Globecast has a content aggregation and distribution team that helps secure distribution on leading Pay TV platforms. Present in Europe, the Americas, the Middle East, Asia, Africa and Australia, Globecast offers simplicity, flexibility, and knowledge to the world’s leading broadcasters.