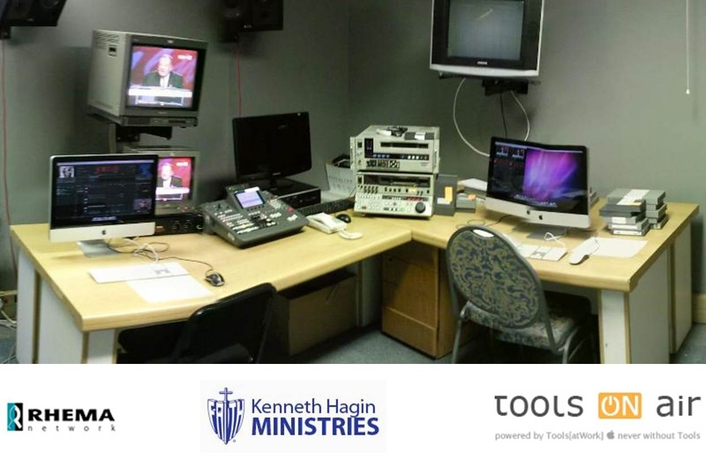 Rhema TV in Randburg
Rhema TV is the broadcast division of Kenneth Hagin Ministries, a worldwide ministry based in the Midwestern United States, with branches across the globe. Its South African campus in Randburg has recently updated their TV broadcast facilities, incorporating ToolsOnAir's Broadcast Suite to create an efficient, ultra-modern TV station with which to reach its rapidly expanding congregation.

"The most significant challenge we faced was that of dated technology," says Travis Bussiahn, Program Manager and Head of Group Media. "Our original system was Beta tape-based, and required an operator to swap out 30 minute tapes that included client content, advertising and promo fillers. This was manageable with our schedule at the time, broadcasting only on Sundays between 5am and 2pm."

But as Bussiahn explains, plans to extend their broadcast schedule to 18 hours made the system less than feasible. "The idea of swapping tapes for 18 hours and the problems this posed for scheduling meant a new direction was needed," he observes. "It was decided that the time was right to invest in a digital system that would carry us successfully into the future."

After looking into a number of options, the decision was made to adopt an Apple-based solution. Centurion-based Concilium Technologies was consulted to design the system, based around an Apple XSAN with 30TB of raw storage, one ingest and two playout ports. Four Final Cut Pro edit suites are connected to the XSAN via fiber, each equipped with AJA multiformat I/O cards.

"We recommended an Apple-based system running ToolsOnAir for a number of reasons," says Concilium's Steve Schafer. "We knew that ToolsOnAir could provide the ideal set of software tools for their application. ToolsOnAir is Mac-based, and they were already running Mac graphics stations. And Apple's Final Cut Server as a media library management package provided a suitable fit with ToolsOnAir. It made perfect sense to have an integrated system design. Installing Apple editing suites sharing an Apple XSan running Final Cut Server and ToolsOnAir gives them a solution with the desired levels of integration. This was infinitely preferable to a fragmented system involving a number of different providers and products. In addition, a future upgrade to HD is easy."

"We were looking for an interface that was easy to use," says Bussiahn, "and we loved what we saw in ToolsOnAir. It's a very intuitive and user-friendly interface, and it makes broadcasting a pleasure as opposed to a chore."

Bussiahn says the facility is currently in the process of digitizing and storing months of upcoming content and building weekly playlists. "The extra storage space and ease of integration with ToolsOnAir means we are now months ahead of ourselves," he says. "The playlists are built with exact timings for each segment, which means we're not at all concerned for the smoothness of any day's broadcast, and the laborious swapping of tapes is a task we are more than happy to forget."