Report on the Conference with Patrick Woodroffe 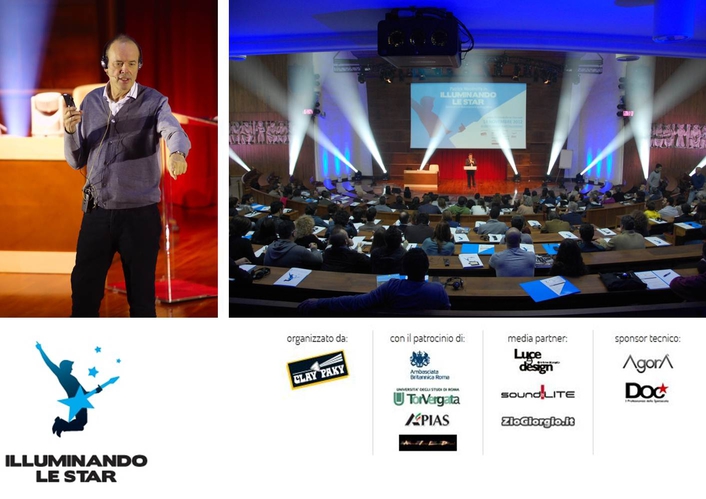 .
Nearly three hundred people attended the “Illuminando le Star” (Lighting the Stars) conference with Patrick Woodroffe, organized by Clay Paky in Rome. The event was sponsored by AILD, APIAS, the British Embassy in Rome and the University of Rome Tor Vergata, with the technical support of Agorà and DOC.

Lighting fans were not put off by the circumstances that made travelling difficult on the day: flooding, blocked streets and motorways, transport strikes and street demonstrations. The event's appeal - the only one of its kind in Italy - overcame every obstacle and drew people from every region of the country.

Patrick Woodroffe retraced the greatest moments of his career in the splendid setting of the Auditorium Antonianum, made even more impressive by the lights installed by Clay Paky. He particularly focused on the preparation he did for the recent London Olympics and Michael Jackson's last tour, which did not take place owing to the singer's death.

Using his personal diary, Woodroffe gave details of the various stages of the "This is it!" project, which was meant to bring Michael Jackson back to the limelight after twelve years of absence. The aim was to make him an everlasting success with an event that Woodroffe himself described as "the greatest show in history". 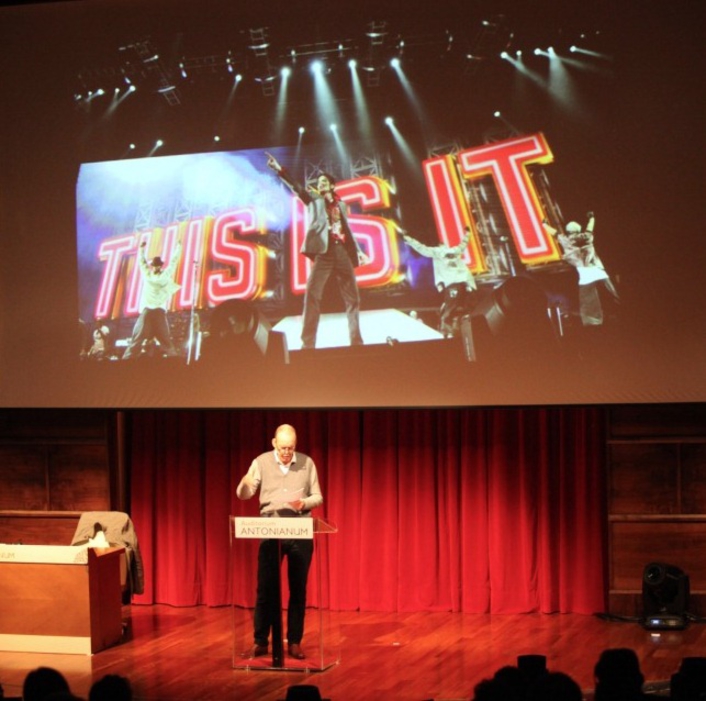 His account then moved on to the lighting design for the opening and closing ceremonies of the London 2012 Olympics and Paralympics. According to Woodroffe, the ceremonies needed a huge "organization machine", which worked continuously for months, with thousands of operators and extras and tons of sound, video and lighting equipment. 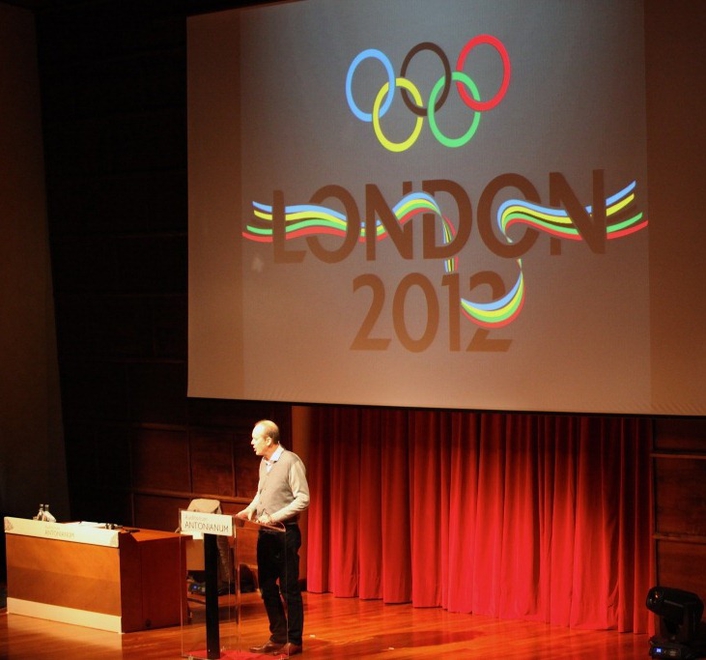 Patrick Woodroffe not only presented these two events from a technical point of view, but also revealed many of the behind-the-scene secrets: how the various professionals interacted, their day to day experience in preparing for the big event, anecdotes and unusual stories. What emerged was a technically interesting description, rich in human interest too. Those who attended the conference quickly realized why Woodroffe is considered one of the top lighting designers in the world and - at the same time - one of the most skilled and charismatic communicators in the lighting industry.

Woodroffe's entire presentation was translated into Italian in real time so that the audience, equipped with headsets, could catch every detail even if they were not highly versed in the English language.

Clay Paky offered the audience a tasty buffet, which was a break for the speaker too, during which the press and any curious attendees could ask him questions and meet him in person. There were many lighting directors, lighting designers, set designers, lighting technicians and service managers in the audience, as well as students interested in the world of lighting. 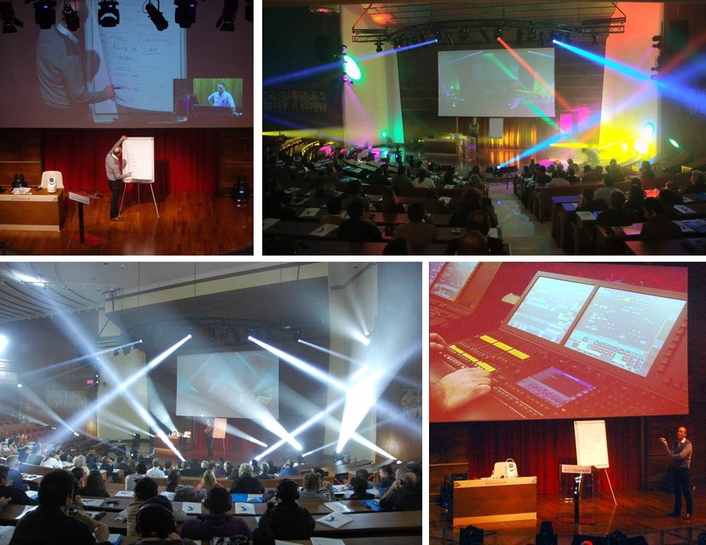 During the last part of the meeting, Woodroffe presented an interesting technical exercise: he demonstrated on the spot how to program lights for a piece of music. Starting with a song chosen by the event organizers without his prior consultation, he showed how to break a piece of music up into parts on the basis of the rhythm and how to match each part with lighting sequences that brought out its emotional aspects through colour and moving light. It was a particularly interesting demonstration for lighting designers and programming engineers, who were thus able to discover their famous colleague's artistic and technical approach. The whole exercise was shown live on a giant screen along with the lighting desk programming. To do this, Woodroffe counted on the expert support of Marco Zucchinali, Clay Paky's LD and programmer, who was skilfully able to interpret Woodroffe's artistic demands and quickly turn them into lighting effects.

During the day, there was also a talk by Professor Marco Re from the University of Rome Tor Vergata, who presented the future Sound Engineering and Show Technology course. The course aims to develop the professionals who work in this increasingly more complex field from a technological and legal point of view. Clay Paky also gave the audience a quick presentation of its latest lights and the company's business. Since its founding in 1976, the firm has brought home success after success, and is today the leading manufacturer on the world lighting market. 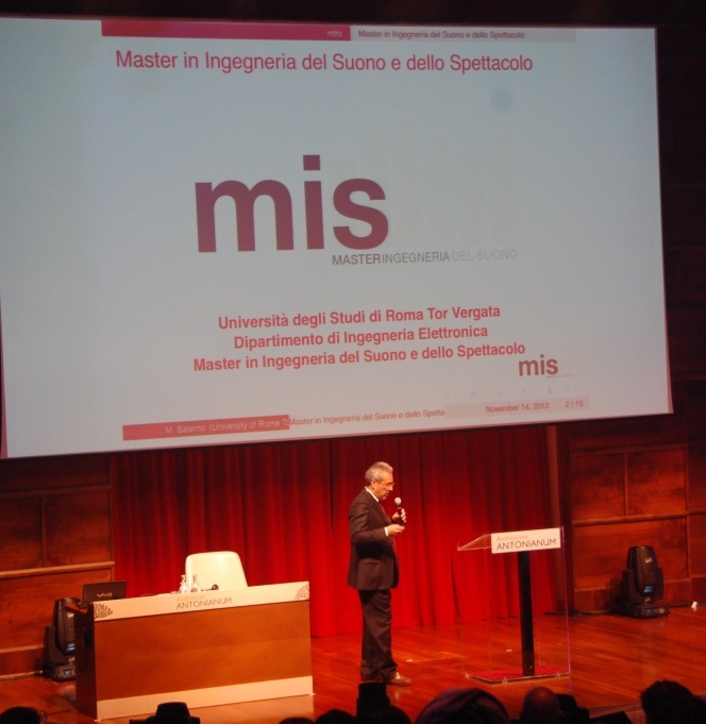 Professor Marco Re from the University of Rome Tor Vergata

At the end of the event, Patrick Woodroffe said: "it is a huge pleasure to find that there are many people in Italy too who appreciate my work. I was delighted to speak to such an expert and attentive audience, whose curiosity was the most gratifying reward for taking part in such a well organized event."

Pio Nahum, Clay Paky's Marketing Manager, said: "the success of this conference–event exceeded my every expectation. We had to close registrations a week early. Patrick was very good: charismatic, munificent, pleasant and perfectly understandable. After the conference, I received many congratulations and thanks. It is undoubtedly an event we should repeat in the future, perhaps by bringing other famous personalities from the lighting world to Italy, and perhaps even by taking the experience of our talented Italian lighting designers abroad." 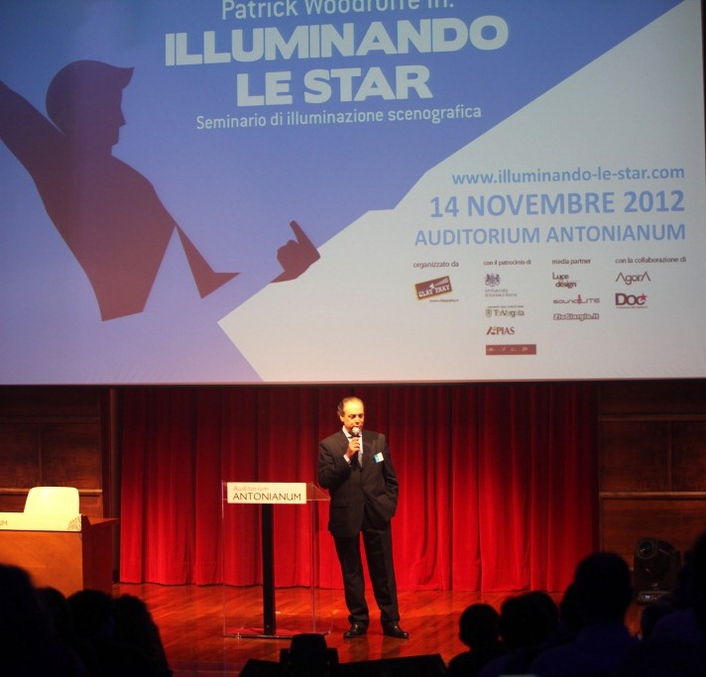 The role played by the lighting industry press was crucial to the success of the event. Among those that believed in its cultural value and promoted it actively and open-handedly were ZioGiorgio.it, Luce & Design and Sound & Lite.