Red TX and One Box Television 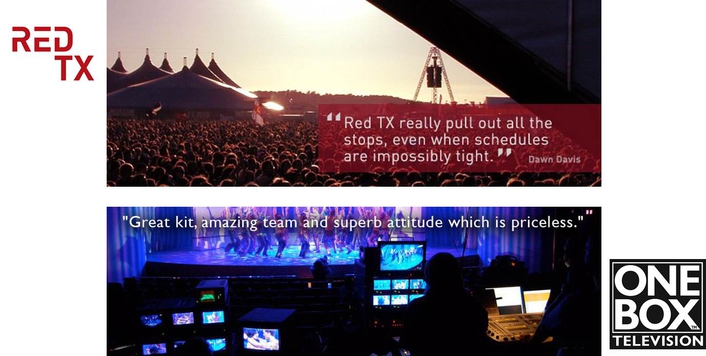 Collaboration Helps Broadcasters Reduce Production Costs
One truck, one price – that is the concept behind a new tie-up between broadcast audio specialists Red TX and One Box Television, a company that provides portable HD broadcast-standard production facilities for multi-camera shoots.

With production budgets under increasing pressure, the ability to combine the most cost-effective HD broadcast facilities with the best in mobile audio is likely to appeal to a wide range of broadcast customers who are keen to reduce costs without compromising on quality.

The collaboration between Red TX and One Box Television was made possible following the recent refurbishment of Red TX’s RED II mobile recording unit. The truck, which is designed to cater for 3D and 7.1 surround sound productions, now incorporates an additional production/overdub and video gallery room at the rear.

Ian Dyckhoff, Director of Red TX, says: “We designed RED II with this additional space because we recognised that some broadcast clients wanted an area where they could set up fly-pack television facilities. After discussion with One Box Television, we recognised that the new truck provided a perfect opportunity to combine resources on certain projects where clients wanted the ability to film as well as record high quality audio.”

Richard Stevenson, Director of One Box television, adds: “The complexity of multitrack sound frequently means that an audio truck will be parked alongside a traditional OB truck on a concert. The ‘sound end’ of the OB truck, which the client is effectively paying for, is rendered redundant. By installing our highly mobile flyaway units into RED II we combine facilities and significantly reduce costs for our customers.”

“The benefits are that our units are customised for each shoot so you don't pay for more than you need,” Richard Stevenson adds. “Our smallest unit is just five cameras but we can install more than that, should the project demand it.”

One Box Television galleries are built into a standard 19" rack and include an HD TX monitor, HD preview monitors, a flexible talkback system and an easy to use vision mixer with tally lights.  The advantages of installing a One Box television fly-away kit into Red II  is that it does away with the need for long cable runs to a separate audio truck  and it limits issues with parking as only one truck is required. It also allows production teams to be very close to the action, thus ensuring speedy liaison with artists and crew.

“Using our unique camera-back fibre kits, cable runs of over 100m are still absolutely possible,” Richard Stevenson says. “The kit has been used in a number of large venues including projects at The Royal Festival Hall, Wembley Arena, The 02 and a number of West End theatres.”

Since launching their collaboration Red TX and One Box Television has worked together on a number of concerts, including the Classic Rock Awards, MTV New Acts and Channel 4's Streetdance.

About One Box Television
One Box Television Ltd was born to aid the expanding requirements of programmes as budgets are cut. By producing a line cut on the day, there are massive savings in edit time and costs. Run by Richard Stevenson, a lighting cameraman with 23 years’ experience, One Box Television guides customers through the whole creative process, thus saving money, time and stress. With access to the finest crews available, One Box Television not only supplies the most affordable multi-camera solution, but the right people to operate it.

About Red TX
Red TX provides a comprehensive concert recording and broadcast service to the music and television industries. The company has state-of-the-art mobile recording facilities and can handle projects of any size or complexity. As well as recording audio for broadcast, the company also records live music events for subsequent release on CD or DVD. It is headed by Ian Dyckhoff and Conrad Fletcher, both of whom have extensive experience in delivering high-quality audio for broadcast.