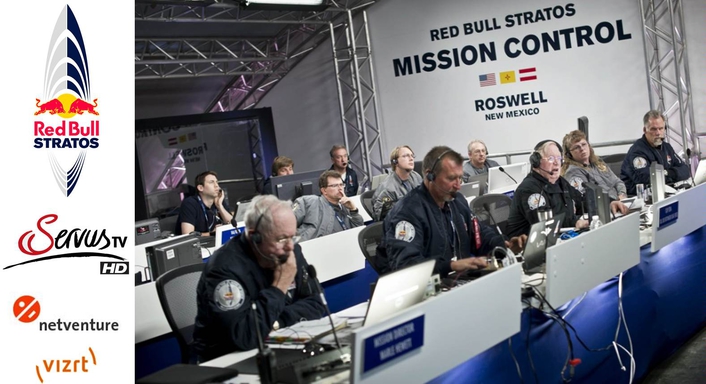 9 minutes later Felix Baumgartner was on the New Mexico desert ground, fists in the air in triumph. His decent set additional world records for becoming the first skydiver to break the speed of sound, reaching a maximum velocity of 1,342km/h (833.9mph), and the record for highest ever freefall.

The entire event was broadcast live on youtube.com where another record was broken for simultaneous views. More than 8 million viewers watched the descent through youtube's streaming service. The event was broadcasted by 77 stations across 48 countries around the world.

All the graphic content for TV and for live stream was provided by Vizrt Technology. The joint team of Vizrt and netventure personnel, represented on site by Yan Heydlauf of Vizrt South West Europe and Stefan Meyer of netventure Germany, gathered live data from capsule telemetry, mission clocks, chest pack information, bio-meds and other mission information in Red Bull Stratos Mission Control in Roswell, New Mexico. All data for several websites were fed by web services provided by netventure using data centers in Germany, Austria, Ireland and the US.

The team used Viz Graphic Hub’s shared memory to distribute content simultaneously between New Mexico and the Red Bull Stratos studio at Servus TV in Salzburg, Austria. A Viz|Trio operator simply called up “pages” in a Viz|Trio show while the content was constantly being updated live using scripting and Viz Graphics Hub shared memory maps. Three Viz Engines, Vizrt’s real-time 3D compositing engine, were used to display the on-air graphics and video compositing. At Servus TV, netventure film Austria, which has been in charge of live graphics services for two years, used the same Viz|Trio show to broadcast this successful event. The several Viz|Trio systems were used to display on air graphics and all the studio monitors.

“Red Bull has been an exciting partner for us to work with over the last few years. From the Red Bull X-Fighters to this amazing jump, they are constantly pushing the limit and bringing us fun new challenges.” said Petter Ole Jakobsen, CTO Vizrt. “We congratulate Felix for this landmark accomplishment.”

About netventure
netventure is using Vizrt technology since 2005 to provide graphic services to a large number of broadcasters around the globe. The company was founded 1998 in Berlin and is today represented in Berlin, Munich and Salzburg. In addition to graphic services they provide all kind of data services across the internet.