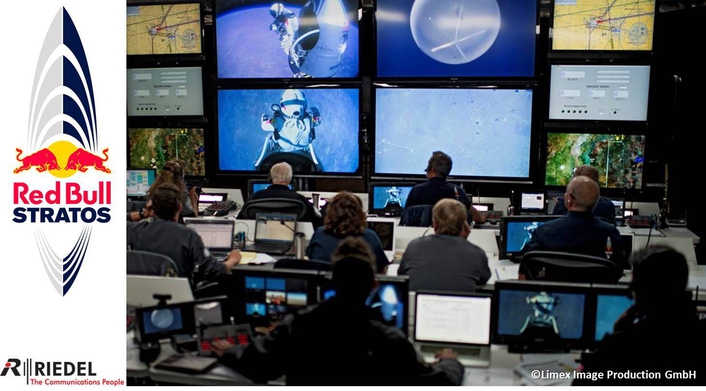 .
The Red Bull Stratos, the 120,000 feet skydive from the edge of space was a mission that transcended human limits. Riedel Communications – one of the leading providers of real-time solutions for video, audio and communications – provided the entire communications solution for this outstanding project, integrating both wireless and wired digital intercom systems. Additionally, Riedel furnished the fiber-based video and signal distribution as well as the wireless video links from the capsule’s onboard cameras – enabling the stunning pictures delivered from the Red Bull Stratos capsule.

Felix Baumgartner, renowned extreme base jumper and sky diver, ascended to 24 miles (39 kilometer) in a stratospheric balloon and made a freefall jump rushing toward earth at supersonic speeds before parachuting to the ground breaking three world records with one jump: the highest skydive, the longest free fall, the first to reach supersonic speeds in free fall and the highest manned balloon ride.

For enabling reliable communication between Felix Baumgartner, all the team members at the launch site and mission control, Red Bull used a comprehensive communications solution from Riedel Communications.

In the Capsule
For the capsule that transported Felix Baumgartner into the stratosphere, Riedel Communications provided the on-board video control system for nine HD video cameras with especially developed telemetry control. This system was responsible for the control of the video recording and also works as a comprehensive digital video router – not unlike a mini OB truck inside the capsule. It offered complete remote control of the whole video system and featured three HD video downlinks that were dynamically assigned to the selected cameras.

Ground-based solutions for Mission Control & Broadcast
The communications infrastructure on-site included the entire compound, the mission control, the production offices, the media/press center and the OB truck. All these facilities and positions were integrated into one single communications infrastructure via a Riedel Artist Digital Matrix system. Artist is a fiber based communications solutions that offers highly flexible, reliable and decentralized communications in broadcast quality audio. The redundant ring topology makes Artist systems an extremely reliable solution for mission critical applications such as the Red Bull Stratos project. 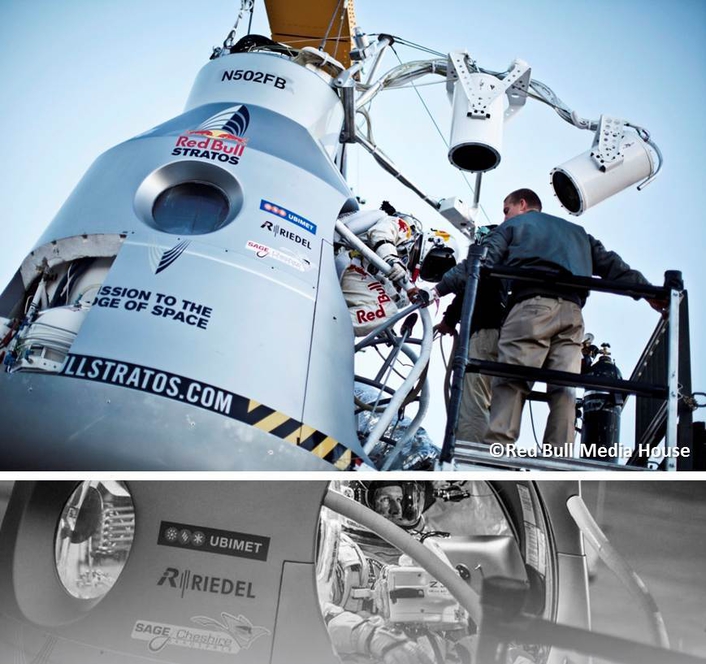 Furthermore, Riedel furnished the on-site digital radio network with more than 100 radio receivers and ten channels, which were seamlessly integrated into the wired matrix intercom system. This means radio users were able to directly talk to intercom users and vice versa.

All video signals on ground were distributed and routed with Riedel's MediorNet technology. MediorNet is a fiber-based real-time network for HD video, audio, communications and data signals that also provides integrated signal processing saving time, cost and effort in installation and maintenance. For Red Bull Stratos project, 24 Riedel MediorNet nodes were installed in a redundant ring topology to provide maximum reliability. In case of a potential connection loss between two nodes, the signals would have still been distributed due to the redundant topology. The connection to the launchpad of the capsule was also realized with the MediorNet system – this time with two MediorNet Compact frames that were connected to the main system. All links in the MediorNet system were realized with Riedel PURE, an extremely robust, tactical fiber cable for demanding mobile applications that is equipped with ruggedized Neutrik OpticalCON Quad connectors.

The MediorNet backbone transported all video signals of the Red Bull Stratos mission as well as all signals from the OB truck and from the tracking truck. It also distributed the broadcast audio between Mission Control and recording facility. Furthermore the data of the telemetry that was used for some broadcast applications such as the Moving Map was transported via MediorNet.

In addition to the video transport MediorNet also serves as a network backbone for the on-site Internet connection providing the Ethernet connectivity in all areas of the compound. 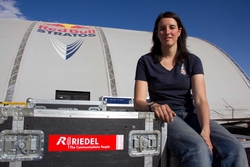 About Riedel
Riedel Communications designs, manufactures and distributes the most pioneering real-time networks for video, audio and communications for broadcast, pro-audio, event, sports, theatre and security applications worldwide. The products reflect today’s leading-edge technologies that translate tomorrow's demands into today's solutions. The company also provides rental services for radio and intercom systems, event IT solutions as well as fiber-based and wireless audio & video transmission systems for large-scale events such as Olympic Games or FIFA World Cups. The Company was founded in 1987 and today employs over 350 people located within 11 locations in Europe, Australia, Asia and the Americas.