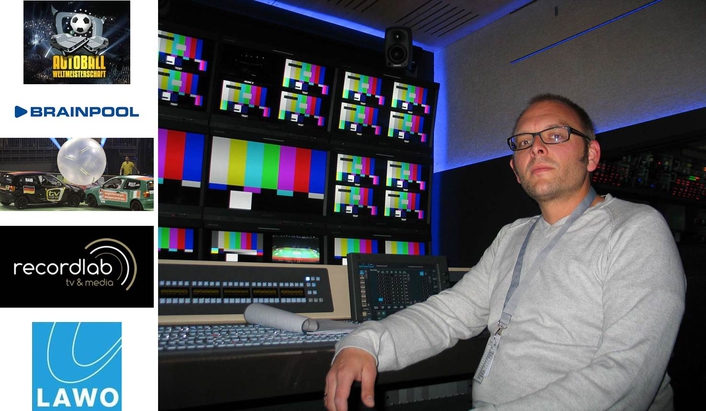 An all-in-one-box solution for video contribution over IP, V__link4 combines a fully bi-directional, four-channel video-over-IP interface with all of the processing tools that are generally required for audio and video data contributions in broadcast production. "With the V__link4, we have chosen a system that allows us to respond more efficiently to customer needs. The IP-based concept for us means less effort and significantly reduced downtime," says Markus Maschke, Managing Director of RecordLab TV & Media GmbH.

The IP networking is handled by V__link4 units, allowing all signals in the network to be accessed directly from the OB van as well as from any stagebox. "There is no classic video or audio cable, but a distributed network in the stadium used for routing all relevant signals," explains Felix Krückels, Director of Business Development at Lawo. "A stagebox – as an audio/video interface on the network – can collect and release four SDI signals as well as 128 audio signals." In football coverage, for example, this means that at each broadcast position – left of goal, right of goal, commentary position, and studio – can collect four camera signals and send them out again.

In the production of the autoball event, images were distributed around the arena in HD quality to around 30 monitors. These included the monitors in the studio, additional monitors for the lights, the commentator’s position, and at the timekeeping and graphics unit, as well as in the editorial and production offices. There were also field monitors providing the images to field reporters so that they knew when they were on air. Moreover, further programs were distributed via a terrestrial HF ring around the arena. Parallel to this conventional house channel, test programs were fed into the network so that, in future, editors may access these using a notebook or tablet.

"In the IP world, the stageboxes are integrated into the network cloud via CAT7 fiber-optic cables. Each stagebox and every connected OB van picks up signals directly", stresses Krückels. "This is a complete change in the way a live event is produced. This paradigm shift means that each stagebox no longer requires a dedicated point-to-point connection to the OB truck. In addition, a signal to another connected OB van can be distributed further without using special routers or distribution amplifiers.”

The prerequisite requirement for this is appropriate routing capacity, and IP mechanisms such as multicast. Previously complex physical cabling is increasingly being replaced by virtual cabling, based on a network infrastructure. Bridging to the network is done commonly via two 10 Gigabit fiber connections. "The second OB truck can even share resources such as cameras, microphones, and some return signals, if this scenario has been prepared," reports Maschke. "When we share these resources, it can immediately access them by using a single line."

An essential benefit of V__link4 devices is that the image signals need not be individually edited in every OB van, since the processing takes place at the source. "Each OB truck typically loops in a frame synchronizer for aligning to an external signal," explains Krückels. "If the picture does not have the colors you want, color correction needs to be applied in every OB truck, and – in video/audio offsets – also audio delay, so that lip sync is guaranteed."

In the V__link4 network world this happens at the beginning of the signal flow: The V_link4 system masters all these tasks straight at the source. "Thus the image for those who collect it from the broadcast cloud is already completely processed," Krückels adds.