Record TV transmits HD signal in the US and Canada

.
The elegant and traditional Four Seasons Hotel in Miami, located in one of the most privileged areas of the city, hosted the launching of another innovative project from Record TV. Last week, Record became the first Brazilian television channel to broadcast in high definition in the United States.

During the event, the team of TV Record Américas presented the group's investment projects that make the Brazilian broadcaster leader in numbers of international offices, present in five continents and in more than 150 countries. 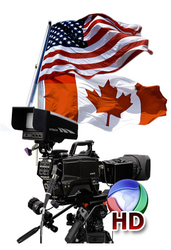 "With over 60 years of existence, Record TV is the oldest broadcast station streaming from Brazil and there is no other Portuguese-speaking channel with such worldwide coverage" said Marcelo Cardoso, President of Record TV International.

To have an idea, in Europe there are more than 60 cable operators that transmit Record TV signal.

The event celebrated the success of a programming that pleases thousands of people around the world. From now on, Brazilians, Portuguese, Angolans and Mozambicans living in the US can follow the station programming with more quality, and with the same dynamism and joy.

"Record is a channel that was born in Brazil for Brazilians, but today it is to all Portuguese-speaking countries," concluded Marcelo.