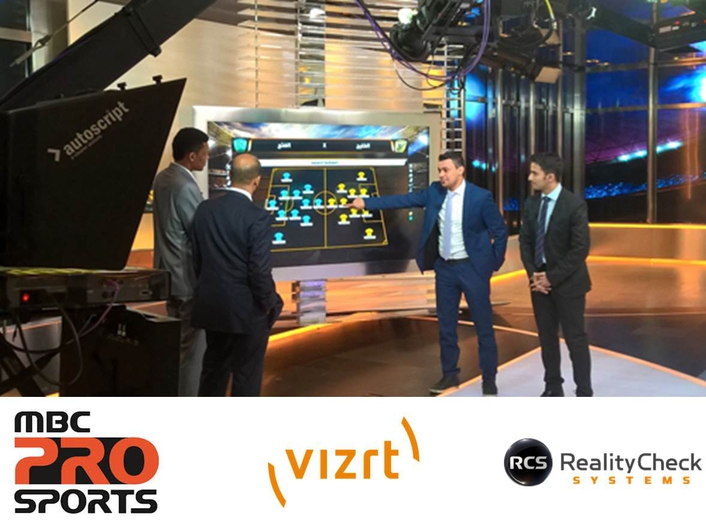 Throughout the season, MBC will tap into LaunchPad's feature set for highlights and review programming across four competitions including the Saudi Pro League and Crown Prince Cup. Using the interactive formation builder, on-air talent will predict match outcomes as they move player markers around a virtual pitch. The match analysis tool will play a key role in reviewing player activity on the pitch, while integration with MBC's Vizrt Viz Libero 3D analysis software will enable quick video clip access and playout. With fast-to-air Twitter integration, MBC talent can also mine and display relevant Tweets, and RCS tailored the system so that MBC can populate LaunchPad scenes with sponsorship artwork - a first for the touchscreen.

"This season we set out to revitalize the viewing experience for Saudi Pro League fans, and when we saw LaunchPad, we knew we'd found the ideal solution. With instant access to real-time data, analysis tools and sleek 3D graphics in an intuitive touchscreen, it's the ultimate storytelling vehicle," said MBC Pro Sports Head of Graphics Fadi Radi. "LaunchPad gives our team the flexibility to get fans more engaged in the sport through analytics. Having worked with RCS for years, and experienced their track record in Vizrt integrations, we knew we could trust them, and they definitely went above and beyond."

MBC's LaunchPad runs on Vizrt's Viz rendering engine, a third-party touchscreen, RCS software and RCS' cloud database DataCenter. The system culls data from Opta data feeds; sorts and organizes the information; and makes it accessible via the touchscreen. Leading up to the launch RCS worked closely with MBC on Arabic translations and built MBC's existing graphics into LaunchPad scenes to ensure the graphics reflected its broadcast aesthetic. A second phase of development, integrating the system with MBC's Grass Valley K2 Dyno video server, is already underway.

"MBC is a longtime client with a talented Vizrt graphics team willing to push the limits of technology to improve the fan experience, which contributed to the overall success of this project," said David Peacock, project manager, RCS. "The integration of MBC's Libero with LaunchPad proved seamless, and it was exciting to work with their team to broaden the range of competitions that LaunchPad now supports with the addition of the Saudi Pro League and three cup competitions."

LaunchPad will be on display at IBC2015 in Vizrt booth #7.A20, where visitors can check out new system features, including an expanded range of Opta feed selections such as the Saudi Pro League, as well as the UEFA Europa League, which RCS client SBS-Discovery recently added to its LaunchPad portfolio.

About LaunchPad
Available in any language and easily transported as production demands, LaunchPad helps networks and leagues connect fans more closely to soccer. Combining proprietary software with international soccer match data from the cloud, the system brings to life real-time analytics and telestrations for advanced storytelling before, during and post-match. An intuitive UI allows operators to call up and analyze touchscreen graphics that visualize stats on players, teams, matches and more, making the game easier to understand. LaunchPad integrates seamlessly with industry standard tools, and each system arrives tailored to the client's aesthetic. RCS plans to extend LaunchPad's portfolio to include motorsports, rugby union, basketball and more in the future.