Ravensbourne Chooses Vinten for its State of the Art Studio 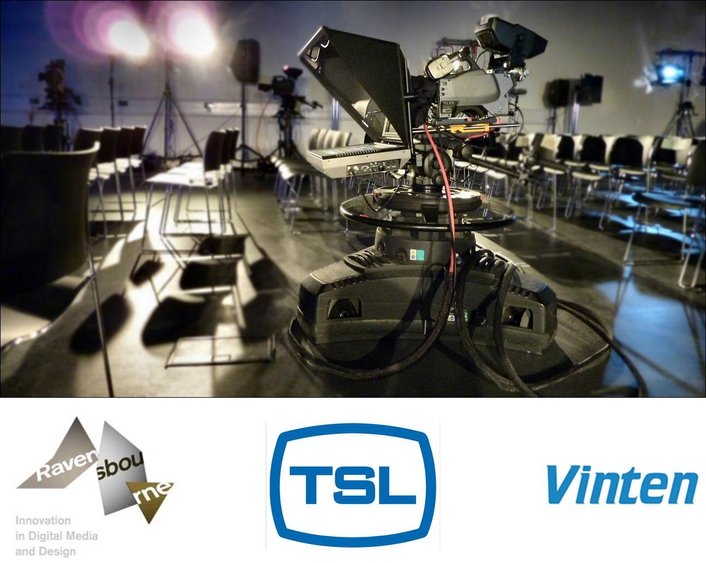 The new studio and other facilities were designed and built at the new campus by system integrator TSL
Vinten®, a Vitec Group brand and a global leader in camera supports, has provided pedestals and heads to Ravensbourne, as part of its move to a new campus on the Greenwich Peninsular, adjacent to the O2 in south-east London. The order includes Quattro, Quartz and Osprey pedestals, fitted with the new Vector 430 pan and tilt head: this makes Ravensbourne one of the first UK users of the new compact and light-weight head.

The new site features a five camera live HD production studio, which is where the Vinten pedestals are based. The Sony cameras are sometimes used with prompters, meaning that the pedestals and heads have to be capable of balancing a wide range of payloads, with quick, easy and reliable set-up. As the cameras are normally operated by students, intuitive operation and performance is vital.

Outside the studio the new campus has a number of camera access points, allowing productions to roam freely. Already cameras and pedestals have been taken out to the atrium for a production, where they proved very stable, particularly when using longer lenses. Outdoor productions are being planned for the summer term. As well as the studio pedestals, Ravensbourne also ordered two Vinten ProPeds for use in other locations.

“Everyone loves them,” said Martin Uren, broadcast technology subject leader at Ravensbourne. “The Ospreys are light but also very rigid and stable. And the range of movement in the Quattro is astonishing – it goes right down to under 50 cm with more than a metre stroke. Vinten have given us excellent service and four fantastic peds – we are really pleased with the whole package, concludes Uren.

“We have been strong supporters of Ravensbourne for a number of years, seeing it as an important centre for enthusing young people about our exciting industry,” said Peter Harman, product manager at Vinten “It is great that those students can now get real-world experience using our market leading pedestals and heads.”

The new studio and other facilities were designed and built at the new campus by system integrator TSL in conjunction with the Ravensbourne staff. The studio and its equipment was commissioned during the summer of 2010, ready to be fully functional in time for the start of the new academic year in October.

Vinten® is a global market leader in camera support technology for broadcast professionals, as well as corporate, education and government applications. The range covers manual heads, tripods and pedestals suitable for ENG, EFP, OB and studio environments. With 100 years' experience pioneering the world's broadcast and film industries, Vinten continues to provide the most innovative, intuitive camera support products available by working closely with today's camera support professionals and understanding their industry needs. Along with five other leading brands in the broadcast industry, Vinten is part of Camera Dynamics Ltd, a Vitec Group company.