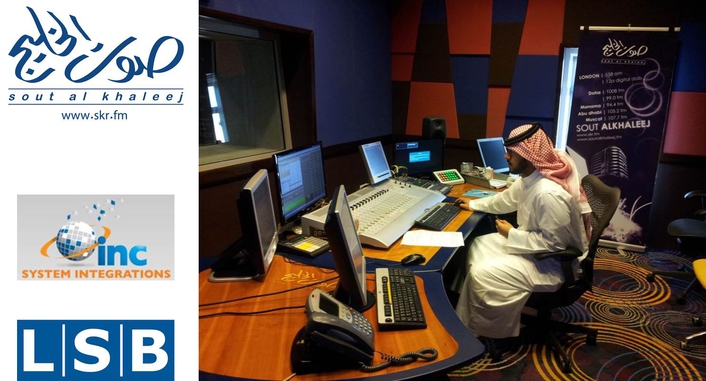 Radio station chooses VSM as control system in the course of broadcast facility modernisation and extension
Sout Al Khaleej is a radio station based in Doha, Qatar. As part of its project to modernise and extend its broadcast facility it has chosen the VSM to control and monitor the new system. The objective of the modernisation was to set up a MCR (master control room) to facilitate the routing of mono and stereo signals.

The project was completed in the middle of 2013 and involved the integration of a new audio router (Studer ONAir3000) in the MCR. This was controlled using the VSM, which brought together all the signals from two studios, two DJ studios, an edit suite and a MCR. The role of the VSM in the daily broadcasting operation is to enable the flexible use of the studio rooms and facilitate signal distribution between the studios and the DJ rooms. INC System integrations in Dubai was responsible for the technical work on site as the leading systems integrator.

In addition to the Studer Router OnAir 3000 this reconfiguration of the broadcasting facility included the installation of Studer OnAir 3000 mixing desks. Up until then routers were not being used. In each of the studios, DJ rooms and the MCR there is one VSM LBP 32 desktop panel used to switch the signals. The buttons on the L-S-B panel are freely configurable and new functions can be assigned to them at any time. The MCR has in addition a vsmPanel combined with a touch display to control all mixer sources and targets in the studios.

The desktop panels in the studios enable the staff to call up directly every source in the facility. In addition to controlling the routings the VSM system has access to all DSP parameters of the Studer routing matrix.

System implementation and modernisation work were carried out while the station continued to broadcast.

In addition the VSM system has the advantage of automatic and time-controlled routing. This enables the customer to operationally pre-configure programme sequences and set time-controlled, automatic crosspoints. In this way all signal switching is already assured in advance.