Radio Aalsmeer (radioaalsmeer.nl), the community radio station for the town of Aalsmeer, The Netherlands, has taken their on-air studio digital with a new mixing console and “virtual radio” software solutions from Lawo. The main studio installation consists of a 16-fader Crystal surface powered by a Lawo Compact Engine.

Value played a big part in the selection of Crystal, according to Lennart Bader and Niels Tenhagen, self-employed broadcast professionals who began their respective careers volunteering at Radio Aalsmeer. Funds for the renovation came from generous donations by Rabobank and Schiphol Airport, so a keen eye was kept on costs.

Tenhagen says that at the start of their project, they “visited trade shows like IBC, and the Lawo Crystal quickly became our favourite. We love the clear design and quality engineering. Literally every knob and button can be programmed.”

“We felt the Lawo Crystal offered the best value for money,” Bader adds. 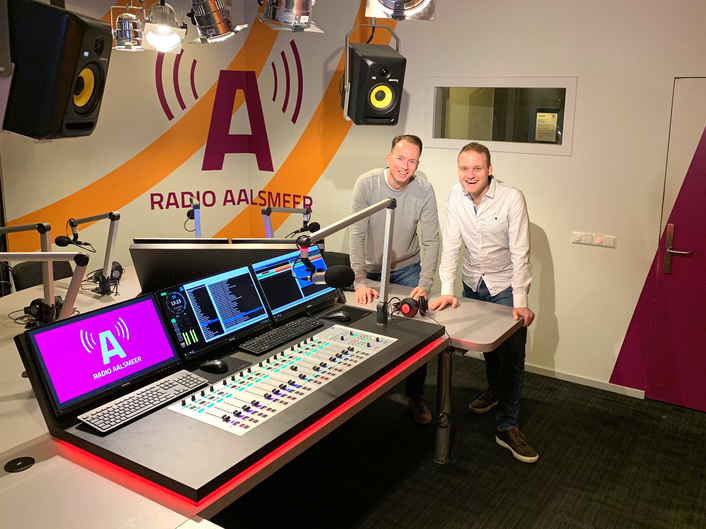 Another Lawo software product, RƎLAY VPB Virtual Patch Bay, provides the station’s main switching matrix. “VPB has turned out to be super versatile and even allowed us to add additional analog in- and outputs,” says Bader. “Via the Ember+ protocol, we programmed a custom GPIO solution for tally lights and a multi-function color strip. Even our doorbell is Ember+ powered!”

The team are very happy with their new studios and Lawo equipment. Says Tenhagen, “We are extremely proud of what we’ve achieved. It is both very functional, and beautiful!”