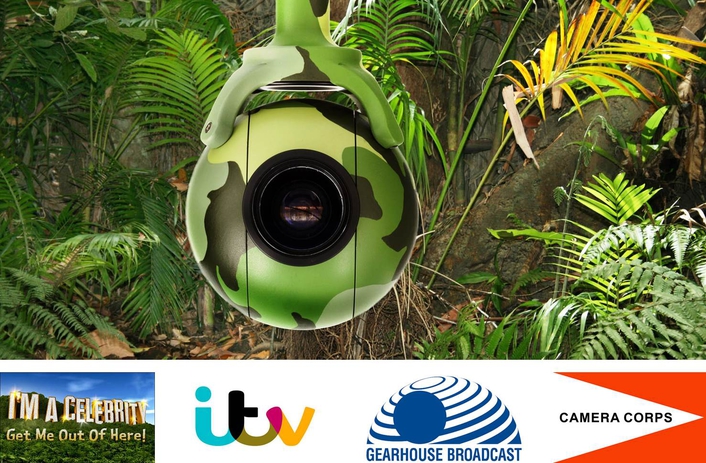 .
Remotely controlled pan/tilt/zoom equipment from Camera Corps, a Vitec Group company with long experience in designing speciality camera systems, will track contestants in the winter 2013 series of the reality television show 'I'm a Celebrity...Get Me Out of Here!' on ITV in the UK and channel 3e in Ireland. ITV is producing the programmes in full 1080-line high-definition with technical infrastructure supplied by Gearhouse Broadcast.

"This is one of the largest shows in the world, with more than 600 staff working in shifts round the clock for three weeks," comments Gearhouse Broadcast COO Kevin Moorhouse. "It is transmitted from one of the hottest and wettest locations on the planet, in the tropical rainforest of New South Wales. "Camera Corps has worked with us very efficiently and effectively over many years to ensure that we capture consistently high-quality video, indoors or out, with full protection against rain, high humidity, high ambient temperature or low light."

"Camera Corps will be integrating more than 90 remotely controlled cameras to follow the action inside and around the camp. These include 16 Q-Ball robotic pan/tilt/zoom heads, 20 HD-MiniZooms with infra-red night illumination, 30 MiniShots, 26 Hitachi DKH-32 and three Toshiba IKH-R1. The Q-Ball heads incorporate a 10:1 zoom optics and a low-noise pan/tilt drive with precise speed control which allow the director to request live follow-shots. We get consistently high picture quality from the Q-Ball and HD-MiniZoom cameras, including all the detail viewers expect when watching in HD."

Technicians David Sisson and James Todd from Camera Corps will be working alongside the Gearhouse Broadcast production team to install, operate and reposition the robotic systems throughout the show.

"The cameras will be operated from remote pan/tilt/zoom joystick panels located in the control room," David Sisson adds. "We will also be installing Camera Corps 'Simply SMPTE' electro-optical and single-mode fiber links which allow HD-SDI from the camera heads to be carried much greater distances than can be achieved over standard copper cable. A popular element of the series is the bushtucker trial which invites contestants to reach out one way or another to the wildlife of New South Wales. One of our tasks is to ensure the local insects and snakes don't set up home inside our camera housings. The Q-Ball is very effectively sealed against incursions of that kind."

Developed and produced by Camera Corps both for rental and for sale, the Q-Ball has delivered close-up video from many very high-profile broadcast events in recent years, including the BBC Proms, Summer and Winter Olympics, international football, motor racing, water sports, tennis, football and rugby. Housed in a robust and weatherproof cast-aluminum sphere of similar diameter to a standard Compact Disc or DVD, the Q-Ball head comprises a 1080i camera with 10:1 zoom optics plus a fully rotatable pan and tilt head. High-precision motors enable the operator to adjust the camera angle from practically any location, including smooth adjustment of vertical and lateral tracking speeds.

'I'm a Celebrity...Get Me out of Here!' is a reality television series in which celebrities compete. Originally developed in Britain by ITV Studios and first shown in 2002, it is produced by ITV Studios and licensed globally.  Viewers vote in the first week for bushtucker trials and in the second week for who they want to stay in the camp. Money is raised for charity with a donation being made from every call. The last remaining celebrity, after others have been evicted, is crowned King or Queen of the Jungle.

Camera Corps specializes in providing high-volume support services for reality television programs as well as very large-scale sports and stage events worldwide. Based on the site of the former Brooklands motor-racing circuit near London’s Heathrow airport, Camera Corps has achieved a pre-eminent reputation for its ability to acquire exciting and unusual television content from exceptionally challenging environments.