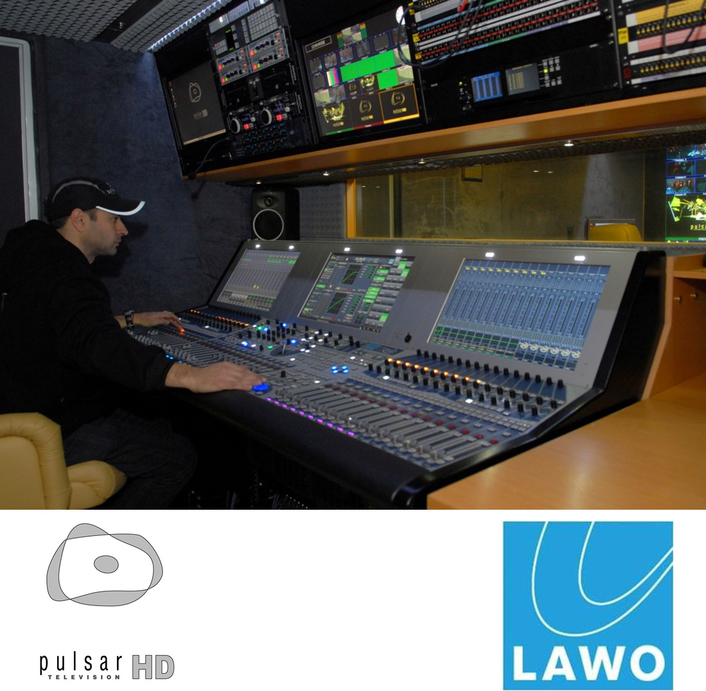 The first HD +3G + 3D Broadcast mobile unit in the country, Móvil Freedom is a $6 million dollar investment for Pulsar Televisión, a specialist supplier of audiovisual services to the broadcast market, which will now become the first to broadcast in HD from Argentina.

The 14.5 metre long extendable vehicle carries audio, video and editing facilities on-board. The centrepiece of the audio control area is a 48-fader Lawo mc²56, offering up to 512 DSP channels and routing capacity up to 8192 crosspoints. A Dallis interface system, and two Lawo stageboxes complete the picture.

It was the search for a fibreoptic stagebox system that initially brought the Pulsar Televisión engineers to Lawo at the NAB show. Other criteria included the requirement for a console that could handle audio production in all formats from mono to full 7.1 surround, in a high redundancy design.

Delivered by Lawo’s newly appointed representative Viditec, all systems had to be ready in time for the 2010 Women’s Hockey World Cup tournament, to be staged in the newly-built Rosario Hockey Stadium. The match between Argentina’s hugely popular women’s team - “Las Leonas” - and South Africa was chosen as the inaugural live HD broadcast. Although the tournament is shown in Europe in SD 16:9, the matches in which Las Leonas take part are shown locally in HD. Using the new mc²56 for its first live programme, Pulsar´s sound engineer Claudio Boubeta summarised with a verdict of “perfect “ - and a big smile!

“In the past, the Lawo brand has been regarded as legendary and a bit unattainable,” explains Katy Pampin from Pulsar Televisión, “but our engineers have pioneered many new brands in Argentina. They’ve surprised the market place here with many of the technologies they’ve chosen for the Freedom HD unit, particularly the audio facilities, and are taking great pride in sharing their knowledge with other broadcast professionals.”

With its ability to broadcast live HD content, the Freedom OB is expected to handle all sorts of broadcast productions, from music concerts to sports and other events. "Freedom is a clear example that the country can be a pioneer in global developments and stay ahead with the latest technology," said Pulsar’s Gonzalo Pampin. "We are deeply proud to be the first to have this equipment, and confident that this launch will help position Argentina among the main players on worldwide television.”