.
Established in 1989, UK-based Prolink provides outside broadcast facilities to the world’s leading broadcast organisations. In 2011, Prolink’s Outside Broadcast unit was converted to High Definition operation and participated in a number of high-profile projects that year, including coverage of the Royal Wedding in London. The conversion included the addition of Ross Video’s Vision 2M mixer equipped with numerous options to accommodate the varied demands of life on the OB road.

In early 2013 the Vision 2M was removed from the OB truck and installed in a new studio facility as part of a short lead-time, long-term project. The search began for a replacement mixer for the OB unit. After a review of various options, the decision was made to purchase a Carbonite 2M-24 from Ross. The delivery of this switcher put Prolink in the almost unique position of being an owner/ operator of all of Ross’ then current video switcher range: Vision, Carbonite and Crossover. Quite a testament to the products and the people behind them. So, why Carbonite? The answer lies in six clear reasons largely stemming from the switcher’s ability to deliver the flexibility and feature-set demanded by Outside Broadcast operations:

·      The built-in synchronisers on all inputs
·      The ability to up-convert any input from standard definition
·      The dual multi-viewers with their ability to be individually tailored for layout and
content
·      The number, power and quality of the keyers and DVEs
·      The physical space requirements of the panel and chassis – a prime
consideration in mobile applications          which are considerably less compared with similar, competing products.
·      Ross’s track record of continuing product development via regular releases of feature-rich and valuable
upgrades 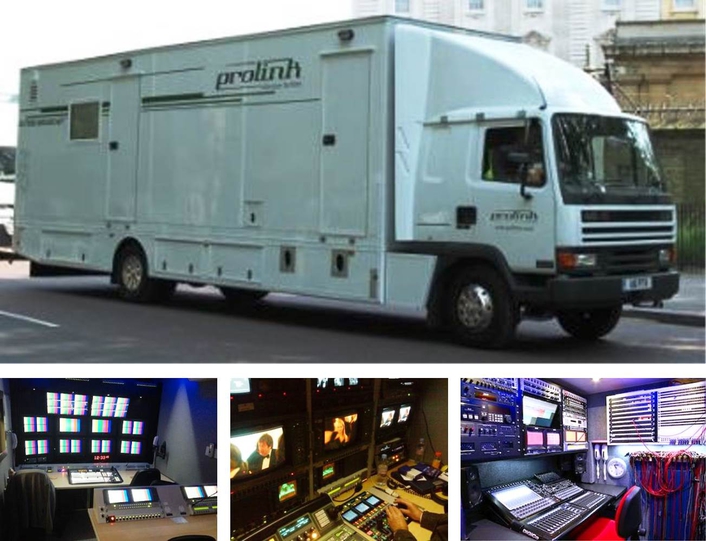 Today the Carbonite switcher operates across a range of projects from Sport and Light Entertainment to News and Current affairs. The majority of the work is “live” making reliability, ease of operation and flexibility key components of the product’s success.
Prolink were initially anxious about how well the (then) lesser-known Ross Video range would be accepted and adopted by the client. Any concerns were unfounded, however; the panels have proved themselves intuitive and powerful with the appropriate buttons and functions all falling quickly to the hands of new operators. Ross Video has now sold over 2000 Carbonite switchers around the world, cementing its place as the industry’s number 1 manufacturer of video switchers by volume.

The technical integration of the Carbonite in place of the Vision was, as might be expected, very straightforward with only the connectivity to the existing Tallyman system causing some head scratching and the need for some new cabling. This issue was very quickly resolved, however, and the whole system is now bedded down and working as expected.

Commenting on the purchase Michael Dugard, Director of Prolink, said “the Carbonite is a real pleasure to take on the road. By its nature Outside Broadcast work has varied technical requirements with changes and additions often occurring after arriving on location. The Carbonite’s ability to up-convert and synchronise inputs has proved invaluable on a number of occasions; they are definitely ‘get you out of trouble’ features”.

About Prolink Television Facilities.
Prolink was established in 1989 and provides Outside Broadcast facilities to broadcasters and the world’s leading production companies. The company also designs, builds and operates permanent studio facilities on behalf of clients. The company works across a broad spectrum of assignments including sport, light entertainment, news and current affairs and corporate communications. Prolink is proud to have made significant technical contributions to many of the country’s recent high profile events such as the General Election, the Papal visit, The Royal Wedding, The Diamond Jubilee and the overseas press operations surrounding the Royal Birth.