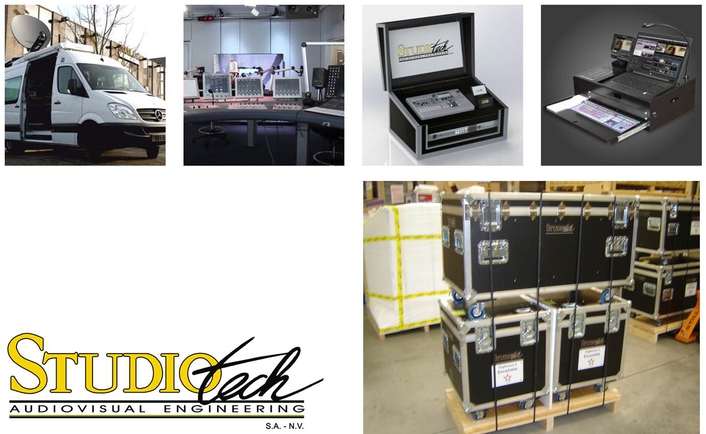 Studiotech began in Brussels (serving Belgium and Luxembourg) in 1990, then Budapest, Hungary (1992), Warsaw, Poland (1995), Algiers, Algeria (2000) and Rabat, Morocco (2011). In a relatively short time, Studiotech in Belgium, Hungary and Poland have become recognised as leading players in the field of audiovisual engineering across Europe. Indications are that Studiotech Maghreb and Studiotech Maroc will follow a similar path in North Africa. The most recent additions to the Group are Sydney (Australia), Paris (France) and Niamey (Niger).

Some features include: overall patch-free video design, communication via an Evertz matrix, modular and redundant, fully integrated visualisation multiviewer system and a video matrix, a reliable system enabling the continuation of broadcasts in all circumstances with the possibility of expansion to manage a second studio.

Senegal
In 2014, Studiotech Belgium delivered all the audiovisual production equipment for the coverage of the XVth Francophonie Summit. Together with RTS (Senegalese Radio and Television), Studiotech Belgium ensured media coverage of the Francophonie Summit held in Dakar on 29 and 30 November 2014, in the presence of many Senegalese and overseas public figures.

This technological and logistical challenge was achieved in record time by Studiotech Belgium.
This huge project fulfilled in a period of 8 weeks included an OB van equipped with 10 HD camera on a trailer, a DSNG vehicle and a radio car, all equipped with generators.
Studiotech Belgium also delivered two complete mobile studios in 4 camera configurations, each for live coverage, 16 ENG sets and 10 microwave links in order to allow journalists easy point-to-point transmissions. Last, but not least, Studiotech conceived and installed all the non-linear workflow.
Subsequently, RTS was provided with this entire audio and video infrastructure in order to modernise their facilities.

Mali
In 2014, within the framework of the technological development of TM2, the second channel of ORTM, Studiotech Belgium supplied, installed and commissioned production equipment as well as the construction of a building in Bamako to accommodate the new installations.

The concept and selection of equipment were entirely managed by Studiotech Belgium and the whole project was completed in a record time of six months, including commissioning and training of Malian operators.
One of the many technological requirements of the project was the integration of a production control room and a final control room in one place that can be used both for direct transmissions and the preparation of transmissions for the distribution loop.
The new audiovisual infrastructure covers a studio including manual and robotic cameras with stage lighting, a control room, a news room, a CAR room, a Protools editing unit, two NLE editing rooms, numerous production servers and a sound booth in addition to a plethora of mobile production equipment.

The latest and best performing computer and audiovisual techniques were implemented by Studiotech Belgium to ensure 24/7 broadcasting and production in high definition standard.
Studiotech Belgium, a renowned integrator in Africa, chose the best manufacturers in the field, including Evertz Microsystems.