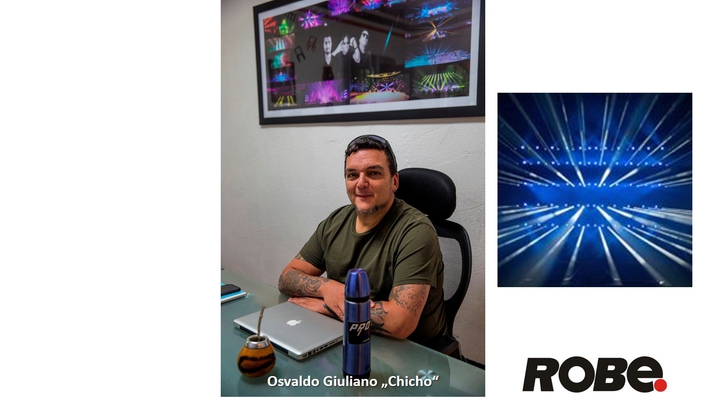 Osvaldo Giuliano “Chicho” is one of three partners in PRO3 an innovative, forward thinking lighting design collective based in Mexico City, with an office in the thriving creative community of Condesa, of for the most beautiful and charismatic districts in the huge melting pot of culture and commerce … that is CDMX.

There is a special synergy between the three individuals – Juan Carlos Zamudio “Charly” and Fulkas Camacho – are Chicho’s partners. They all bring different personalities, ideas and talents to a show design and their work – known for its freshness and style - embraces a number of sectors – from music to corporates, some theatre and TV work and also architectural illumination.

They own a quantity of their own lighting equipment – kit which they feel no design is complete without – and this includes 36 x Robe Pointes together with some other fixtures and effects, all stored in a warehouse in Iztapalapa, another part of the city away from the inspirational bohemia of Condesa.

Their Robe fixtures are out constantly on their own projects, including a recent tour with OV7 y Kabah, two youth groups who joined forces to complete a 24-date tour of Mexican auditoriums which will be followed by shows in the US.

They also specified Pointes for famous Mexican rockers Molotov who have been in Europe with a PRO3 stage and lighting design, and their own fixtures have also recently been out with girlband Jeans back in Mexico.

‘We are extremely happy with the Robe investment” says Chicho, “We always get great results and the fixtures are fast, lightweight, very bright and highly reliable!” 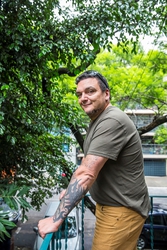 Chicho had used Robe products on tour in the US, Colombia and Chile before PRO3 decided to buy their own, so he was aware of their capabilities and also the build quality of the brand in general.

Then Robe’s Mexican distributor made a quantity of fixtures available on ‘live demo’ which Chico, Charly and Fulkas were able to assess properly using them to light the 2014 Cumbra Tajin, a famous Mexican cultural event staged in the region of Veracruz to highlight the archaeological heritage of the Holy City of El Tajín, which includes Pyramid of the Niches … which was illuminated for the occasion.

This experiment with the Pointes was so successful that they decided to purchase the Robes on the back of it! “It was love at first sight” says Chicho laughing.

Since buying the fixtures initially for their own projects, they are also finding that in the rare times that their lights are not in action, they are in big demand for cross rentals as so many Mexican bands now have Robe Pointes on their riders.

As a designer, the moment he enjoys the most on any lighting mission is when the lights go down, and the show is about to start and you can feel the anticipation and excitement of everyone in the venue.

The company offers a unique and special creative opportunity for all their clients and are currently building a reputation in Mexico and further afield for bringing visual passion, imagination and drama to a diversity of environments.

PRO3 is an abbreviation for ‘Professional Production, Provider’ which is what they do – for the design through to the delivery. The company was founded in 2009, but the three have known each other and been working together since 2002. Chicho and Fulkas have around 28 years’ experience each and Charly is the ‘new boy’ with 10 years in the industry as visual designers – which also often includes set and video as well as lighting.