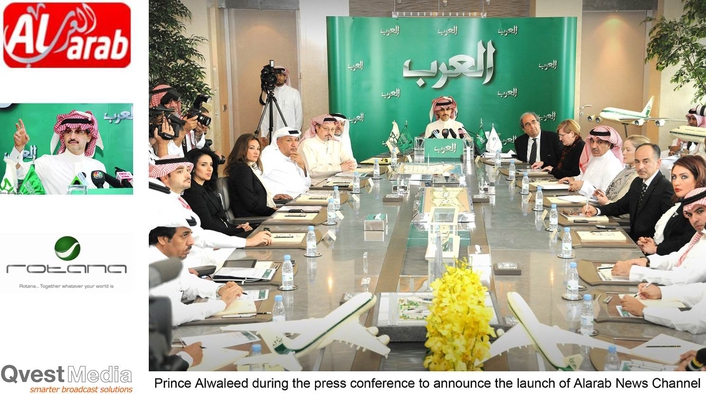 Prince Alwaleed commented: “Alarab News Channel will have the most advanced infrastructure in the Middle East.”

Mr. Fahad Alsukait, CEO Rotana Group added: “Our investment in the founding of Alarab News Channel is a ground-breaking step forward in terms of media policy – not only for Bahrain but also for the entire Gulf region.”

Mr. Jamal Khashoggi, General Manager of Alarab News Channel and Editor in Chief, also added: “As an independent regional broadcaster, Alarab will offer its audiences a unique and up-to-the-second program of news as well as innovative news formats of its own.”

Thomas Müller, General Manager of Qvest Media said: “About eight months ago we tendered a bid for this very demanding project. Now that we have been awarded the contract, we are very happy that the project concept we developed for the tender will now be realized.”

No compromises will be made in connection with the technological realization of the infrastructure for the TV station. End-to-end file-based workflows, a high level of automation for all production processes, a centralized media asset management system across all areas of production, as well as HDTV distribution for satellite and multi-platform live streaming and VOD are but a few of the key features that Qvest Media has been asked to integrate. Part of the German Wellen+Nöthen Group, this specialist for consulting and development, systems integration and technical support services will be responsible for the entire technical implementation and integration of three studios with interconnected control rooms. This includes, among others, state-of-the-art robotic and manual camera systems, sound technology, as well as the latest technologies for infrastructure monitoring, editing, graphics and editorial processes.

The fully-integrated production and broadcasting platform will be equipped exclusively with products and systems from renowned international manufacturers, for example the latest generation of scalable Avid ISIS, Avid Interplay and iNews. Real-time 3D graphics rendering and channel branding will be performed using the latest Vizrt platform. With the optimized newscast automation systems of Mosart, Alarab will be able to ensure highest quality for program across all newsroom-related processes. Thus, the entire newsroom workflow – e.g. sound processing, video mixing, on-air graphics overlay and even camera tracking – will be remote-controlled by the automation using preconfigured templates.

In 2012, Prince Alwaleed was welcomed by HM King Hamad Bin Isa Al Khalifa who hosted a dinner in honor of HRH at the Bustan Palace in Manama during HRH’s visit to Bahrain.

Furthermore, while in Bahrain, Prince Alwaleed and HE Sheikh Fawaz Bin Mohammed Al Khalifa, Bahrain’s President of Information Affairs Authority signed the agreement for the Rotana and Alarab channel headquarters’ new location in Manama, Bahrain and held a press conference.

Prince Alwaleed commented: “This is the strategic step for Rotana and Alarab News Channel and a giant leap for media in the region.”

In 2011, the Prince announced “Alarab” will be the name of his new international news channel. The well-known Saudi journalist, Mr. Jamal Ahmad Khashoggi, will be managing this new 24-hour channel which will target Arabic-speaking viewers across the Arab world and beyond. Prince Alwaleed also announced an agreement with Bloomberg LP in which Bloomberg will support the creation of five hours of financial and economic news programing throughout the day on the channel. The Alarab News Channel is an independent venture from Kingdom Holding Company and the Rotana Group and is privately owned by Prince Alwaleed. 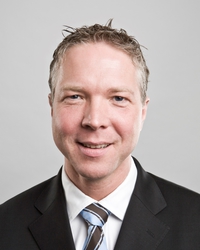 Thomas Müller, General Manager of Qvest Media says: “About eight months ago we tendered a bid for this very demanding project. Now that we have been awarded the contract, we are very happy that the project concept we developed for the tender will now be realized.”

About the Wellen+Nöthen Group
With a powerful spectrum of services Wellen+Nöthen Group is a leading technology partner for innovative products and solutions within the broadcast and media industry. Together with its Middle East and Southeast Asian operations by Qvest Media, Wellen+Nöthen Group has locations in Germany, Dubai and Singapore with a team of more than 130 employees within its business units Consulting & Development, Professional Products, System Integration, Technology Service & Support and Rental Solutions & Services. Thanks to its comprehensive business know-how, Wellen+Nöthen Group provides technical consulting & development services.

In such fields as strategy and management, information processing, technical applications, outsourcing and business support, teams of highly-skilled professionals provide support to customers along the entire value chain. As a reseller, representative and rental company for AV and broadcast IT solutions, Wellen+Nöthen offers the product portfolio from more than 120 leading international manufacturers. Alongside its outstanding technical expertise as a systems architect, the company continuously develops new holistic operation areas, which are streamlined to its customers’ needs. A unique range of scalable technology support services rounds off the company’s portfolio. Today, over 2,500 customers, including major broadcasters and media networks such as ARD, NDR, Sky, SWR, RTL, ZDF, Al Jazeera, DMI, Etisalat or Turner Broadcasting, rely on the companies’ technical expertise.