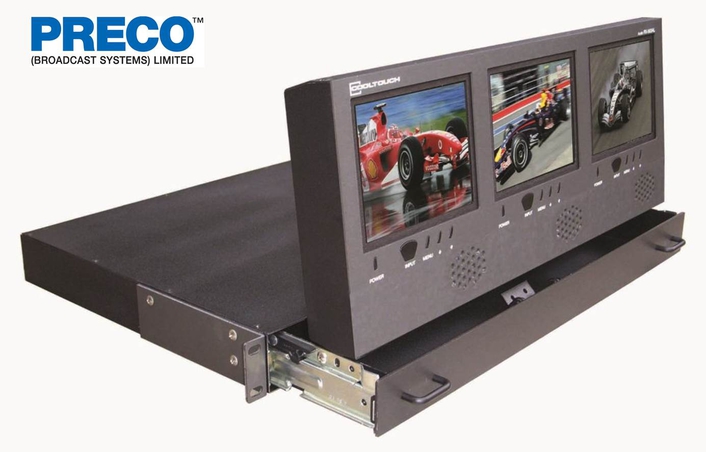 "The DX-563A is one of the most space-efficient video monitoring systems available," comments James Thomas, Preco's Director of Engineering and Technology. "Having three sensibly-sized screens, it is ideal for use in outside broadcast vehicles as well as in crowded rack-rooms, post-production studios or ingest suites. Being both mains and 12 V DC powered with a power consumption of just 36 W brings the further advantage of easy integration into a completely mobile production system."

The Cooltouch incorporates six PAL/NTSC auto-sensing composite video inputs. Each of the 115 x 87 mm video displays has a 960 x 234 pixels resolution (320 RGB triads x 234 lines). Dot pitch is 0.116 x 0.348 mm and backlight lifetime is greater than 10,000 hours. Image brightness is adjustable up to 350 candela per square metre, and contrast up to 250:1, via on-screen display. Three analogue audio inputs feed forward-facing loudspeakers which can be used for confidence monitoring or fed from an externally-sourced alarm.

Available now, the DX-563A multiscreen monitor is housed in a black chassis with anodised grey front panel and rack ears. WDH dimensions are 485 x 130 x 53 mm and weight is 2.3 kg.