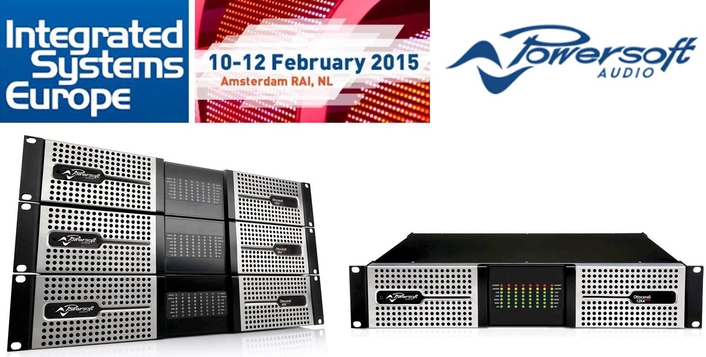 Powersoft is unveiling three new high-performance 8-channel power amplifiers at ISE, as part of the Ottocanali DSP+D Series
Powersoft announces the expansion of the successful Ottocanali Series, with the addition of three new high-performance 8-channel power amplifiers — under the series Ottocanali DSP+D. The Italian manufacturer will be exhibiting at ISE 2015 (10-12 February) for the sixth consecutive year through its Dutch partner TM Audio with a dedicated area (Hall 7, K175), and will present for the first time at ISE the award winning X Series amplifier, set to revolutionise the amplification market.

OTTOCANALI DSP+D
Even more flexible and reliable, the new Ottocanali Series DSP+D offers a wide range of system control and monitoring functions as well as sound shaping options, a total of up to 12,000 W output power at 4 ohm over 8 channels for lo-Z or distributed line systems — all neatly packed into a double rack unit.

Powersoft’s legendary efficiency saves valuable energy, keeping both operational cost and ‘carbon footprint’ at a minimum: the new Ottocanali Series shines with outstandingly low power consumption and heat dissipation; this dramatically reduces costs from the AC mains supply and air conditioning/cooling systems – not to mention the benefits to the environment for a greener planet.

X SERIES
Also on the Powersoft stand will be the revolutionary X Series, the first amplifier that doubles as a system tool, integrating a large amount of functionality generally only found in separate outboard units. This includes an innovative system of channel routing, a truly universal mono, bi- and three-phase balancing power supply (from 85V AC up to 440V AC without the need for manual selection), and a revolutionary fully-featured DSP.

The X Series consists of two models equally suitable for concert touring and fixed installations: the X8 (eight channels in a 2U chassis), and X4 (four channels in a single rack unit). Both models share the same power density and can deliver up to 5200W @ 2 ohms per channel.

Powersoft looked at what amplifiers will require for the next 10 years and made a platform capable of meeting these needs as well as building in ‘future proof’ expandability. The X Series natively supports AES3, two redundant Dante by Audinate digital streams and analogue inputs, providing up to four different selectable input sources per channel.

The set-up parameters of the Powersoft X Series are fully integrated into Armonía Pro Audio Suite™ which offers an intuitive interface for parameter adjustment, a comprehensive control over the digital audio processing and complete real-time monitoring of the system performance. An integrated WiFi connection permits the Powersoft X Series to be accessed and managed via any smartphone or tablet through a user interface specifically developed for local monitoring.

COLLATERAL EVENTS AT ISE
The award winning X Series will be running for two other industry accolades at ISE as the finalist in the Audio category for the InAVation Awards and also for NewBay Media’s ISE Best of Show Awards. The first European installation took place at the end of 2014 at the gebr. de Nobel music venue in Leiden, Netherlands.

In addition, Powersoft will be sponsoring the 5th Dante AV Networking World by Audinate on February 9 at the Amsterdam Holiday Inn near the RAI Convention Center. The free all-day event will feature presentations, training workshops and interactive panel discussions led by industry design consultants, AV installation contractors and IT networking experts.

In addition, a hands-on Dante workshop will bring together teams of participants to demonstrate how quickly and creatively a Dante network can be designed. In this context, the Powersoft X8 will be placed on Dante’s Wall of Fame.

Finally, Powersoft will also sponsor the AudioForum by Connessioni, which will take place on the afternoon of February 9 in Room G001at the RAI Convention Center and is free to attend. Created in 2013 to make the link between audio manufactures and integrators, AudioForum is a full day educational event to disseminate knowledge and contents, and investigate the tools that can help professionals in correctly designing their audio systems. The Powersoft demo will be chaired by Luigi Chelli, Powersoft Sound Engineer, who will show X4 performance, focusing on the highest level DSP with multi-stage signal processing.