A professional group of companies and individuals put the event together. Television Production Company Don’t Look Down Convergence Agency were responsible for producing the event for DSTV while AV Unlimited supplied the full technical. The dome structure in which the event was held was supplied by IN 2 Structures, part of the Gearhouse Group of Companies. The set designer was Garrith Castelyn from AV Unlimited and Dreamsets were involved in building the stage. For the fifth consecutive year, Joshua Cutts from Visual Frontier was the lighting designer. 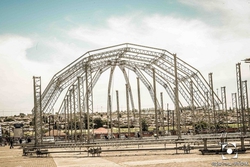 “It was a big design from a lighting point,” explained Joshua Cutts. “The brief was to create a black negative space and to use the lines of the dome to create a rib type feel. Basically we lined the entire structure with LEDs to create a ‘skeleton’ structure.”

Due to the scale of the dome this was not the easiest thing to do. The dome is roughly 35m wide, 80m long with a leg every 6m. “We used 170 x LED fixtures, each was patched as three different fixtures. Just to control the rib side, I had to control 510 fixtures.”

“I drew the whole rig in grandMA 3D to help with programming,” said Cutts. “Out of the ten performances, seven were fully automated. I did busk on three songs for fun. I had to have some fun.”

From a control point of view the show was seamless. “I had control of the media servers and for the first time I was allowed to see thumbnails of all video clips because of the new grandMA2 software release.”

Cutts always appreciates working with AV Unlimited. “They are used to handling big gigs and you never have to worry about them delivering. They know just how to make things happen.”