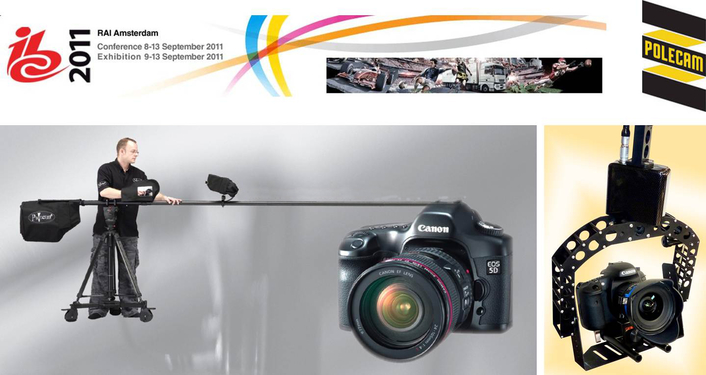 Polecam and new Polecam Wide motorised camera head.
Polecam has chosen IBC2011 in September as the launch venue for a major addition to its range of single-operator broadcast-quality camera cranes.  Polecam Wide is a motorised camera head designed to accommodate digital single-lens reflex cameras or camcorders of up 200 millimetres width, 280 millimetres height and 3.6 kilograms weight.  It is fully compatible with Polecam rigs of up to 6 metres span.

"Pan and tilt angle can be smoothly adjusted or continuously varied at a wide range of speeds, from an ultra-slow four seconds per degree up to a fast seven seconds per complete 360 degree rotation.  Integral slip-rings can be used to convey power to the camera and to export composite video for monitoring.  That provides the capability of shooting unlimited horizontal pans without getting cables in a tangle.

"Pan and tilt speeds are joystick-controlled via an electronic drive system programmed with a U-shaped acceleration and deceleration profile.  This delivers ultra-fine control when the stick is in its central range, becoming faster as the stick is deflected towards its maximum angle."

"Polecam Wide allows dynamic tracking shots of unprecedented accuracy to be achieved while retaining the wide-ranging control over horizontal and vertical camera position made possible by the Polecam camera support system," adds Sales & Marketing Manager Jeremy Curtis.  "The head is designed to be up and running as an integral part of the Polecam system within minutes of an operator arriving at site.  If you work at the sharp end of television or film and are coming to IBC, be sure to stop by for a demonstration at our IBC stand, 10.C49.

Technical features of the Polecam Wide head include high-resolution pulse-width-modulated electronic drive, replacing the bipolar direct-current feed used on Polecam's previous joystick control system.  Optical pulse encoders fitted to the pan and tilt motors provide feedback to the motor controller, ensuring smooth and stable operation.  Motor braking is activated whenever the joystick is stationary.  An integral 12 pin connector delivers up to 12 volts at 1 ampere to power a camera.