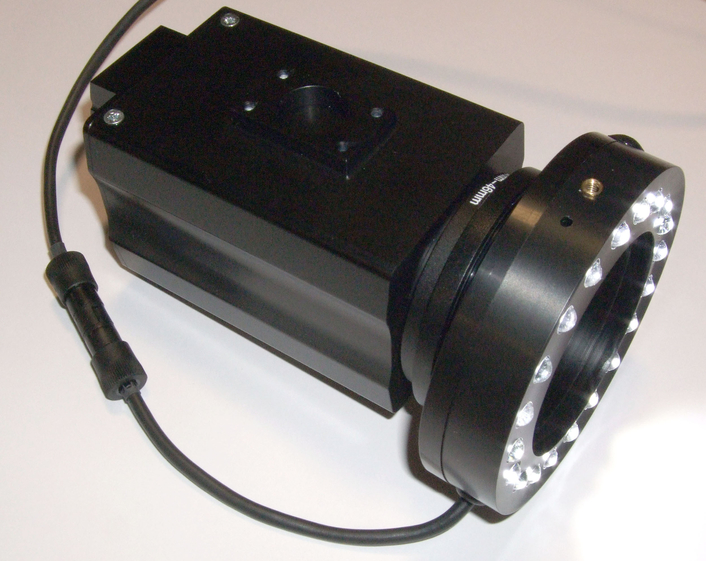 Latest addition to the Polecam range of truly portable video and digital-film production equipment, the Microwhite LED head is a highly innovative luminaire designed specifically for use with miniature broadcast-quality HD and SD cameras. It incorporates 20 white light emitters in ring configuration on a black Delrin body which attaches to a Fujinon compact prime lens via Polecam's FFFS head or to other cameras via a mounting cradle.

"The Microwhite has proved extremely useful during development trials," comments Polecam founder and managing director Steffan Hewitt. "Being only slightly wider than the lens, the LED ring delivers the light from exactly where it is needed. It is ideal for use as a powerful dimmable primary light source in close-up shots and as a soft fill light to reduce shadowing in medium-distance shots. Powered from the Polecam DC supply bus, the Microwhite LED head retains the portability and mobility for which the Polecam system is reknown." Polecam's Microwhite LED head is scheduled for introduction at on stand B10 at Broadcast Video Expo 2010 in London (Earls Court 2, February 16-18).

Polecam was established in 1998

Polecam was established in 1998 by extreme sports cameraman/director Steffan Hewitt. While directing a series of windsurfing kit commercials in Hawaii, he needed to obtain close wide-angle front sequences of a windsurfer in action, shot from a tracking boat or jet ski. Steffan improvised a rig comprising a miniature camera on a carbon-fibre windsurfing mast. Returning to Britain, he developed a lightweight go-anywhere rig with a remote joystick controlling a high-precision pan and tilt head. Polecam is now supplied in HD and SD versions with a range of additional options including underwater and 3D pan/tilt heads. Polecam Ltd is active globally from its base near Bedford, England.