Polecam Systems announce commercial success with HD Zoom lens and remote heads allowing larger cameras on Polecam
Polecam Systems will show their signature Polecam range of lightweight carbon fibre jibs and remote heads at IBC 2014, hugely popular and used increasingly in program making world wide, and will also be showing an ancilliary product that has been commercially successful in its own right, the Resolve Optics Z10 HDcf zoom lens.

The Z10 HDcf  10 x zoom lens
has been selling in volume to a range of clients inside and also outside the broadcast industry who are using it for military, covert surveillance, subsea, ROV and other industrial applications, usually paired with a high definition minicam, and where required, fitted into a rugged underwater housing such as in marine applications.  It is also being used in the medical industry in the training of surgeons, surgical staff and medical sales personnel in operative techniques where the demand for higher quality is ever present. Polecam owner operators are using it on a Polecam with an HD minicam for sports, natural history, documentaries, drama and all types of general program making.

The lens is ultra compact and has a C-mount thread. It has an unbeatable close focus of 450 mm and is enhanced through the use of low dispersion glass. The zoom and focus movements utilise floating cell technology which produces a smooth, light movement ensuring the best performance throughout the zoom range. A dedicated control grip system for remote zoom, iris and focus is also available.

The Polecam remote pan & tilt heads
that now allow larger cameras and DSLRs to be mounted on the carbon fibre jib arm – the Narrow Head, the Wide Head and the Long Head. These outstanding heads have been very successful too in broadening the Polecam user base by bringing in DSLR users and those who prefer to use digital cinematography and other large sensor cameras like Red Epic, the Black magic Cinema Design cameras, the Canon C300 and cameras from Sony and Panasonic. The heads also allow mounting of HD minicams, and the original BB Head is still available if you need a low profile head to get right in close to the action.

The Antelope PICO Extreme Slow Motion and Live Camera System:
It is designed to offer spectacular extreme slow motion in a minicam form factor, giving previously unrevealed details from vantage points where no other camera has been able to go. It’s the world’s only POV style ultra slow motion camera. Antelope PICO records with up to 520 frames per second in nativeHD. The system is based on a 2/3” CMOS 2K chip and guarantees high detail and excellent light sensitivity. Deflickering technology eliminates lighting related flicker in realtime. It has a permanent live HD-SDI output, offers dynamic replays and is fully remote controllable with full lens control.  Coax / Fibre Link and Wireless transmission are all possible, and an underwater housing is also available.

The Antelope PICO camera can be used in confined spaces, on hotheads, and on Polecam for a totally new vantage point for ultra slow motion such as for sports analysis as well as spectator sports. It has already been used behind the goal for football where the small form factor allows it to see all the action in super slow motion through the net without obscuring the view of the spectators. It has 3D capabilities too and two can be set up in a 3D configuration. 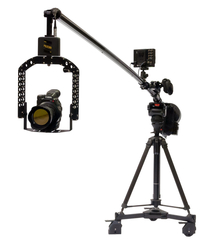 Polecam Systems is a small camera and lens specialist provider, so a full range of minicams and lenses will also be on show.

The company has continued to develop and refine Polecam, never standing still, and today Polecam Systems offers a wide choice of ways to own a rig, from the Polecam Starter Pack, an entry level configuration which, using the Long Head, will take a variety of cameras such as minicams, D-SLRs, the Canon C300, Sony Nex 700, Black Magic Design Cinema camera or RED, and now, at the higher end of the range the new Polecam Professional Pack PPP.When configured as 7th Heaven, the full Polecam rig has an extended reach of 8m/26' and when fitted with a minicam you can get right in close to where the action is, giving a unique creative viewpoint to your productions.

There is a whole range of mini HD cameras, other specialised cameras, heads, accessories, recorders, not to mention 3D, underwater add-ons and Extreme SloMo too.