Polecam announces major expansion to its product range at BVE 2011 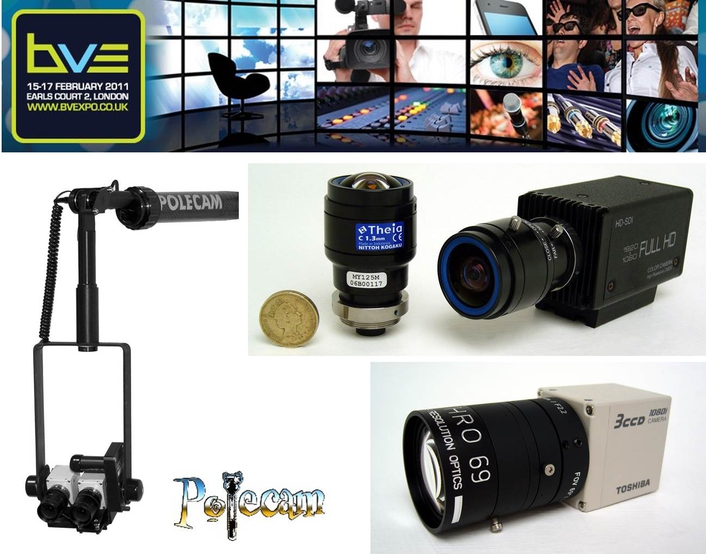 The Polecam 3D-Head, the HRO 69 C-mount lens and the Theia MY125M ultra-wide-angle effects lens
Three major additions to the Polecam product range make their first British exhibition appearance at BVE 2011 in London's Earls Court, 15-17 February. Exhibiting on stand B10, Polecam will introduce to UK broadcasters and programme-makers the 3D-Head and two lenses designed specifically for use with broadcast-quality ultra-compact HD cameras. An enhanced version of the industry-standard Polecam truly-portable production rig will make its world-first appearance.

Supplied with all new Polecam systems since its launch at NAB 2010, the 3D-Capable Head allows extremely realistic stereoscopic content to be produced from paired HD mini-cameras and lenses such as the Toshiba IK-HD1 and the HRO69. Attaching directly to all standard Polecam rigs, the 3D-Mounting Plate is optimised for normal studio shooting and close-ups where it is desirable to match normal human eye spacing. Setup is quick and easy, conforming with Polecam's strategy of ensuring high mobility and operational efficiency. A levelling plate with three fine-adjustment verniers allows each camera to be exactly matched in height and forward angle.
"The Polecam system is fully 3D-ready," comments Polecam founder and Managing Director Steffan Hewitt. "Using unobtrusive minicams eliminates the need for a comparatively massive and complex 'mirror rig'. Our cameras and lenses can easily be brought closer than the optimum 65mm interocular distance. A wider version is available for producers who want a greater distance between cameras. The 3D-Head retains the freedom to achieve sweeping dynamic vertical and broad lateral camera movement without sacrificing fast-and easy tools-free set-up and dismantling and the high efficiency which results from the true portability."

Miniature split head cameras have become standard tools for HD video production in recent years but traditional lens manufacturers have not responded to demand for matching high-quality optics. The Polecam HRO69 is a C-mount lens designed specifically for 1/3 inch 3-CCD HD cameras. Compatible with cameras such as the Toshiba IK-HD1, Iconix RH1, Panasonic GP-US932, Ikegami MKC300, it produces far higher resolution images than any comparable model. The HRO69 has 3.5mm focal length, 69 degree horizontal angle of view and F2.2 to F16 aperture range. Features include back focus, a special bump cover to protect the lens front, and a 40.5mm filter thread adapter option. Stainless steel locking screws for aperture and focus adjustment are provided plus spare lens caps. Weight is 159 grammes, length is 50mm and diameter (without filter adapter) is 37mm.

Designed for use with 1/3 inch single-CCD or CMOS cameras of up to 5 megapixel resolution, the C-mounting MY125M captures a massive 125 degree horizontal field of view with high geometric precision and 10cm to infinity focal depth. Aperture is manually adjustable between F1.8 and fully closed. The MY125M weighs just 100 grammes, is 54mm in length and 36mm in diameter and can be used across a temperature range of -20 to +60 Celsius. Being a rectilinear lens, the image is top-down so the camera must be mounted upside-down or the output inverted electronically. With less than 3 per cent barrel distortion, the MY125M's geometric accuracy is incomparably superior to traditional fisheye lenses, allowing production in confined spaces such as a car. A stellar performer in Toshiba's SPACE CHAIR Project when it delivered broadcast-quality video in combination with a Toshiba IK-HR1S camera from the edge of space, 98,000 feet above the Nevada desert, the MY125M allows huge areas of a sports stadium to be covered from a single viewpoint without need for a pan-and-tilt head. Polecam supplied the same cameras and lenses to Camera Corps for integration into their Net-Cam system, capturing Frank Lampard's now historic disallowed goal during the England football team's defeat by Germany in Bloemfontein.

The Polecam rig itself will be exhibited with enhancements that are now standard features. These include new low-friction bearings in the pan and tilt mechanisms, delivering significantly improved performance especially at slow speeds.

Polecam provides complete HD/SD broadcast production solutions for a wide range of applications, based on the company's world-leading truly-portable single-operator jib arm and miniature HD and SD camera systems. The Polecam system delivers the freedom to place a long-reach jib anywhere a cameraman can go, eliminating the restrictions associated with heavy multi-operator cranes. Combined with an ultra-compact camera head and choice of recorders, Polecam jibs permit new and unique angles that would be difficult any other way. Polecam rigs operate from a standard tripod and dolly or from the Polecam body harness, enabling smooth shots in the studio or on location. Rig and de-rig are fast and easy, requiring no tools. Polecam systems can operate underwater with a fully submersible pan-and-tilt head. Polecam stocks a wide range of lenses, recorders, power options, remote control and multiplex equipment. It also offers the simplest 3D system in the market.