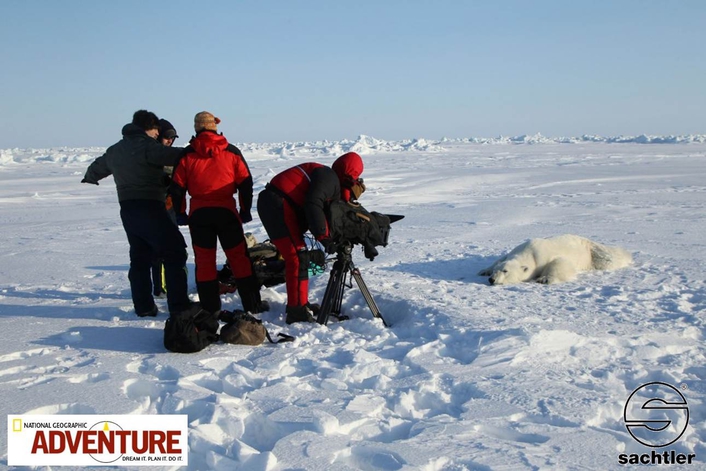 "The Sachtler fluid head stayed fluid – even in the -33 degree Celsius weather."
When cinematographer David Linstrom signed on to shoot a segment of “National Geographic Wild-America’s Big Five”, he turned to Sachtler, a Vitec Group brand, for camera support.

“This segment is about scientists from the United States Geological Survey, conducting a study on polar bears,” he explains. “They go out across the frozen sea from the town of Deadhorse, on the northern slope near the Arctic, and look for bears on the ice. When they find a bear that hasn’t been tagged before, they shoot it from a distance with a tranquilizer dart. After it becomes immobilized, they land and go to work taking the bear’s vitals—tagging, weighing and logging the information into their record book.

“To document this, my camera package featured a Sony F800 and the Sachtler System 20 S1 SL HD fluid head and tripod. I would be covering everything from helicopter-to-helicopter shots to tripod shots of details of polar bears in the snow. We needed solid support that could stand up to the rigors of the arctic locations,” he explains.

High User-Friendliness
“At times we were at -33 degrees Celsius, flying in a Hughes 500D helicopter. Even with these extreme conditions, I knew I could rely on my Sachtler to work flawlessly. Sachtler is simply the best tripod in the industry for documentary and fieldwork. They are lightweight yet stable and the controls make it a joy to work with a long lens. By using the tension settings, I personalize the balance and resistance so I can dial in just the right amount of tension in order to get beautifully smooth pans and tilts. And the head always works like it is supposed to, no matter what the temperature. The seals are tight so, grit doesn’t get in and cause bumps.” Linstrom sites the design and construction of the tripod as another factor that sets Sachtler apart. “The speed levers on the tripod decreases the time it takes to set the height and it’s also ergonomically correct, as if a camera operator designed it.”

Extraordinary Shoots
Hampered by extreme temperatures and heavy winds over the week-long shoot, Linstrom says he was still able to get more than enough shots for the episode. “The scientists we work with are happy to have us along but we are guests on their mission,” he explains. “I didn’t have time for things not to work. The Sachtler fluid head always stayed fluid. I didn’t even notice a difference in the -33 degree Celsius weather.” Linstrom says some of his favorite shots on this particular episode were the extreme close ups of bears teeth, claws and hair. “They are amazing animals and have adapted incredibly well for that extreme environment. They deserve all the help we can give them in order to survive.”